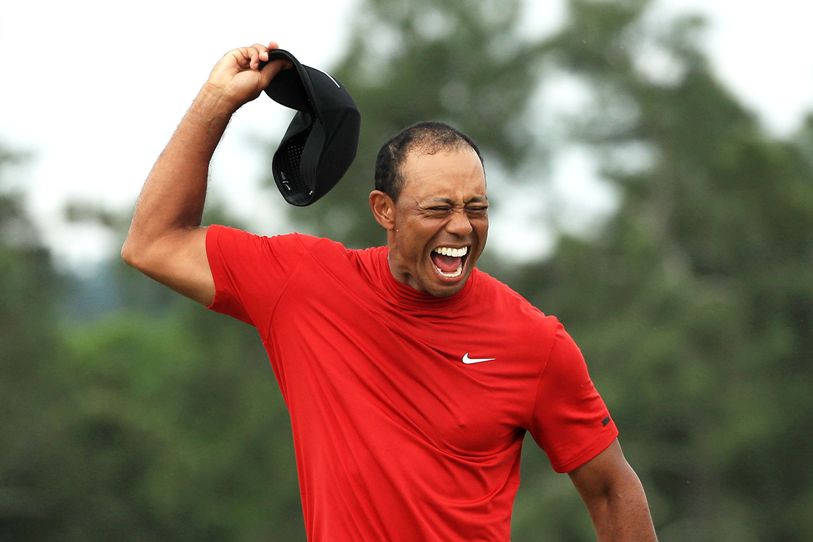 When Tiger Woods let out a yell after sinking his final putt at the Masters last month to win his fifth green jacket and 15th major championship, it put an exclamation mark on one of the most intriguing stories in golf.

Many claimed it was the greatest comeback in sports. Others asserted that it was the much-needed boost that golf was sorely lacking. For his legion of fans and adoring worshippers, Tiger’s victory was a major league jolt of adrenalin and proof, if they ever needed it, that Tiger was, is and always will be the GOAT (Greatest of all Time).

My first reaction, once it was inevitable that Tiger was going to win, was to sigh and say to myself, “OK, here we go again.”

From his “Hello World” introduction to the pro game, through multiple majors and dozens of victories, to his serial philandering, Tiger has been accorded the attention of a rock star. While he fights to maintain his privacy, his fans can’t seem to get enough. He wants to be Greta Garbo; they want him to be a Kardashian.

Either way, it’s all-Tiger-all-the-time in the media now. I get it. Tiger’s comeback is a big story, and if he wins the next major or the one after that, it will be huge. The problem isn’t with the attention he gets for winning, it’s the attention he draws when he’s not even playing or when he’s not doing anything special. Network TV would rather show us a shot of Tiger walking or eating a sandwich than some other player making a golf shot.

As a golf writer, I guess you can get on the bandwagon and just do stories about Tiger but there are so many other good ones. For the past four years, pro golf has been really interesting, with at least a dozen elite players with markedly different personalities at the top of their game. When Tiger started playing regularly again in 2018, and especially after he won the Tour Championship last fall, Tiger was part of that conversation too. After the Masters win, the only thing anybody wants to talk about is Tiger.

The Greatest Comeback Ever? Maybe

I’m not even sure it’s Tiger’s greatest comeback. After four back surgeries, an embarrassing arrest and a period when he wasn’t sure if he’d ever play golf again, Tiger returns to play, contends in a few events, wins the Tour Championship, then the Masters. Nice story. They might even make a movie about it someday.

Is it a better story than world’s best golfer, at the pinnacle of his career, self destructs in sordid Thanksgiving Day mess, shames family and self, divorces wife, falls into deep despair, then finds the resolve to overcome public humiliation and win three times in 2012 and five times in 2013?

Is it better than world’s best golfer gets hit by bus, may never walk again, then returns in 18 months later to win the U.S. Open?

All good stories. Personally, I think Tiger’s mental comeback in 2012 was a bigger hurdle to overcome than the physical one in 2018. Once Tiger found that his back was fine to play again, there was no reason to think he couldn’t win again, and even win majors. Even if Ben Hogan fans disagree, Tiger at least has the overall edge in comebacks at 2-1.

Tiger is not a binary choice

There are a couple of hundred players that have privileges of one kind or another on the PGA Tour. Some have huge rooting sections. Others are lucky to have their family and a few close friends in support. Nobody has as many fans as Tiger Woods.

I am not one of them.

Don’t get me wrong - I have plenty of respect for Tiger’s skill and his immense ability to win. It’s just I’m not a Tiger fan in the same way that I’m not a fan of the Boston Bruins. I prefer to cheer for the Toronto Maple Leafs.

My stance is pretty normal in the world of sports. You root for one team or another, one player or another. With all due respect to Premier League football, being a fan of one doesn’t make you a hater of the other, it’s just a preference. If you root for Jordan Spieth over Justin Thomas, nobody I know of would interpret that as being a Thomas-hater.

That doesn’t seem to wash very well with Tiger fans. They seem to have the feeling that if you’re not with us, you’re against us. In Tigerworld, there are only lovers and haters.

That echoes the style that Tiger utilized to win so many championships. He played with a chip on his shoulder, a bit of anger. His foot-on-the-throat-take-no-prisoners style evinced a me-against-the-world attitude. It was intimidating but it worked. And a lot of people liked it.

I didn’t. Arnold Palmer competed as hard as anyone, but you never got the feeling he would run up one side of you and down the other leaving nasty gashes with his metal spikes. He was always courteous and sportsmanlike, much like Bobby Jones, and charitable in defeat. I like that. There are a few players today that demonstrate that same kind of behaviour – Jordan Spieth, Jason Day, Rory McIlroy and Rickie Fowler - and my choice is to root for them.

All his life, Tiger has been chasing golf immortality. When he was just a skinny kid getting started on the PGA Tour, he already had three U.S. Amateur titles to his credit, not to mention three U.S. Junior titles. In amateur terms, that put him ahead of everybody except Bobby Jones, but in his mind, that was yesterday’s chase. He had his sights set on being the best ever, amateur or pro – and one record in particular: Jack Nicklaus’ 18 major titles.

As he amassed wins and majors on the PGA Tour and began to pass virtually every legend of the game, only Phil Mickelson stayed within spitting distance of Tiger and might be considered his only legitimate foil. There have been other periodic contenders, but Tiger dispatched them like a prize fighter plows through sparring partners. Tiger’s battle has never been against the field. It’s always been against history.

I’m a Nicklaus fan, and have been since I was a kid, so Tiger’s quest to surpass Jack’s records has indubitably been part of what made me root for others instead of Tiger. Obviously, Jack isn’t competing any longer and can’t improve on his legacy but cheering for others is my way to cheer for Jack when Tiger (or anyone else) threatens those records.

Tiger now holds virtually every important record in professional golf except two: total majors and total victories. Tiger’s next win, which is almost a sure bet, will be his 82nd on the PGA Tour and will tie Sam Snead. Provided Tiger can stay healthy, passing Snead is a given and his career win number may approach triple digits.

Tiger’s other milestone is the one he will cherish most if he can achieve it. That would be breaking Nicklaus’ record of 18 majors.

It will be difficult. When Tiger racked up his first 14 majors, he dominated events by as much as 12 and 15 strokes. Other players were intimidated. They folded under the icy stare. They couldn’t handle the pressure.

I don’t think the elite players today are afraid of Tiger. McIlroy already has four majors of his own. Spieth and Koepka have three each and at least half a dozen others have won majors, tour championship and money titles. They respect Tiger but aren’t likely to wilt in the heat of battle.

Some will claim that Koepka, Molinari and Johnson wilted at Augusta’s 12th hole while Tiger stayed strong. More like Tiger played smart and patient. The others made a mistake. Nobody folded.

The win at Augusta in April is the only major Tiger has won when he wasn’t leading after 54 holes. Maybe it’s a new weapon in his arsenal. Now, others must worry about Tiger coming from behind, instead of chasing his lead. Is that an edge he didn’t have before?

Players will also need to figure out how to deal with smiley-huggy Tiger. They’re not used to that. The fans love it; most would be OK if Tiger started blowing kisses to the other players, as long as he wins. Personally, while I never liked the Tiger mean streak, it was easier to root against that guy than this kinder gentler Tiger.

All in all, I’m happy Tiger is back in the mix. I still won’t be rooting for him, but his presence is good for golf and will deliver incredible headlines for at least a few more years. As for Tigermania, I’ll just have to learn to live with it.