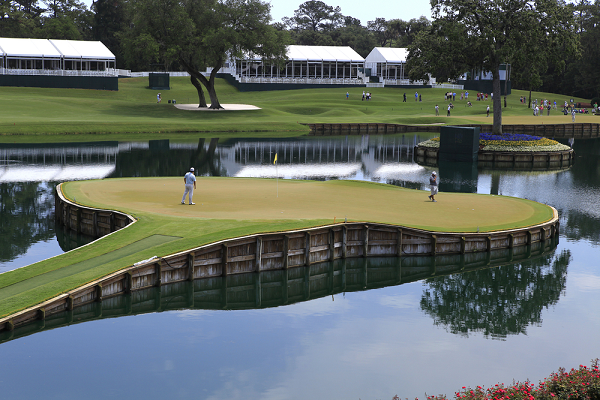 The Island Green Giveth and Taketh Away
As per usual, TPC Sawgrass’s 17th hole delivered its fair share of highlights and lowlights last week at The Players Championship. That dichotomy was perfectly embodied by the vastly different experiences Ryan Moore and Tiger Woods had there prior to the weekend:

On Thursday, Moore hit arguably the best shot in the history of the hole. Using a 54-degree sand wedge, the 2004 U.S. Amateur champion slam-dunked his tee shot into the cup without a single bounce. Pandemonium ensued.

Here’s a view from behind the hole:

Simply sensational! Moore doesn’t yet have a major on his resume, but he certainly has a knack for racking up aces on some of the sport’s biggest stages. There was the hole-in-one on the 17th hole at Innisbrook in 2007; the ace on the 16th at Augusta National in 2010; the 5-iron strike he jarred on the 7th at Bay Hill in 2012; and, of course, the miracle he pulled off on the 16th at Riviera in 2016, when his tee shot bounced twice in the rough before finding the bottom of the cup:

That’s a legitimate winning BINGO card of iconic holes-in-one! Tiger, on the other hand, has won 14 majors over the course of his illustrious career, yet has only notched three total aces on the PGA Tour. On Friday, however, the 43-year-old would have gladly settled for an old-fashioned par on the island green instead of the quadruple-bogey 7 he ended up carding. It all happened so quickly for Woods, who got off to a blistering start to his second round with three birdies and no bogeys through his first seven holes. After pulling his first shot and watching it take an unforgiving bounce into the water off of the back of the green, Woods hit what appeared to be a perfect wedge shot from the drop area. However, the ball had the wrong spin and propelled into the water immediately after impacting the putting surface. Woods took a more conservative approach for his fifth shot, but needed two putts to get off the hole.

Despite having won the Players Championship twice, Woods has now only hit the island green in regulation a smidge under 67% for his career (47/71). That’s one of the more surprising Tiger Woods stats we’ve ever come across!

Shot of the Week
It would be pretty difficult to make a case against Ryan Moore’s slam-dunk on 17 not being the Shot of the Week, if not the Shot of the Year, but we already used that shot earlier in this Shag Bag. So we’re giving this week’s honours to Harris English, who sunk this incredible albatross from 236 yards on the 11th hole at TPC Sawgrass on Thursday:

Trick Shot of the Week
If you’re like us, you’re already gathering six garbage cans so you can try this yourself when the season begins:

Whiff of the Week
With the swing path his club was on, nothing good was going to happen even if he made contact with the ball . . .

Putt of the Week
It didn’t get the “Better than Most” call from NBC’s Gary Koch like Tiger’s putt in 2001 but it should have. Watch Jonatthan Vegas sink the longest putt ever on the 17th green at TPC Sawgrass.