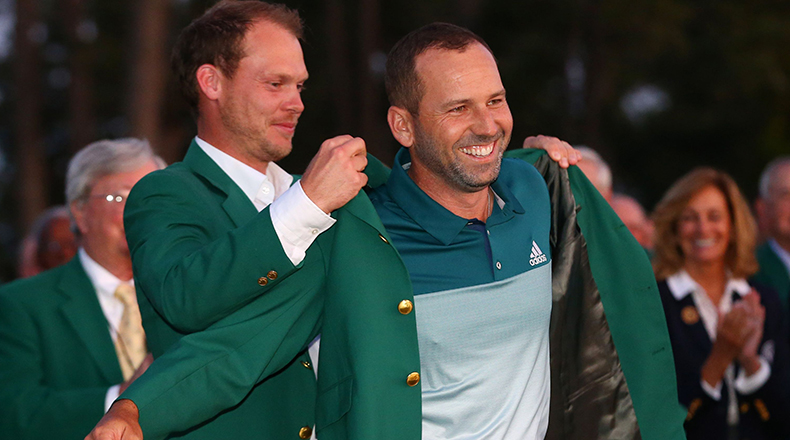 We polled a number of ClubLink PGA pros to get their views on the 2018 Masters and their picks to take home the green jacket on Sunday.

What’s the thing you like best about watching the Masters?

Matthew Belacca, Director of Operations, Glendale Golf & Country Club: Of course the back nine on Sunday is probably the best nine in all of golf. The Jim Nance commentary is superb, filled with nostalgia and drama. To me the Master’s is the start of the golf season with the opportunity to get together and watch it with friends and family or members as if it was the Super Bowl.

Andrew George, Director of Operations, King’s Riding Golf Club: Limited commercials! As the calendar turns to April, we get to watch the best golfers in the world at the greatest golf event in the world. Also, it means the golf season in Canada is right around the corner. It gets the golf juices flowing and I feel like a kid again.

Mike Grierson, Director of Operations, Glencairn Golf Club: I’ve always loved watching the Masters because it always seems like the best players always rise to the top of the leaderboard by Sunday. You end up watching the best players at the top of their game. The back nine is filled with holes that can either propel someone into the lead or drop them out of contention. There isn’t a Masters that hasn’t had great drama on the back nine and it makes it so exciting to watch.

Ken Lane, Director of Operations, Caledon Woods Golf Club: Having walked the grounds and enjoyed the great golf at The Masters every year, I thoroughly enjoy watching the challenges of “Amen Corner”.

Chris McNair, Director of Operations, Emerald Hills Golf Club: What I like best about watching the Masters is one of those questions that can change year to year depending on who is playing, and what type of tour trends are happening at the time.  It use to be as simple as getting to see the holes in more detail and wondering what it would be like to see these players navigate this enigma of golf courses. I was lucky enough to spectate at the 2015 Masters and can now focus more on enjoying the outstanding media coverage on the players that are there, and who I think has the game to get the job done over 72 holes. For 2018, the best thing about watching the Masters will be to see how the emotions and comfort levels of these top players shift dramatically as soon as they step foot on the property. It’s totally clear how much this event means to them, especially when they put the tee in the ground on the first hole.

Mark Napier, Director of Operations, Heron Point Golf Links: The first Major of the year really gets me excited for the year of golf ahead, both at the club and on Tour. It seems each year, especially this year, that so many of the top players are at the top of their game heading into the Masters, so the excitement for marquee names to be in contention on Sunday is always there.

Brad Sewards, Director of Operations, Station Creek Golf Club: The Masters has always been a new beginning for me, last swing, mistakes, bad shots and triple bogeys are a thing of past… it’s a new start full of birdies!

Each year there are usually a couple of players who could be considered sentimental favourites, usually someone who has played the Masters a lot but has never broken through. Last year Sergio Garcia defied expectations to nab his first green jacket. This year, those sentimental favourites include a couple of past champions - Tiger Woods and Phil Mickelson – who will be arriving at Augusta in the best form they’ve been in for some time. Do either of them have a legitimate chance to win?

Belacca: Looking at both of Mickelson’s and Tiger’s performances in the last four weeks, both of them have a legitimate chance of competing or winning the Masters. If either of them can stay out of trouble off the tee, with their course knowledge, especially around the greens, that puts them at an advantage and increases their chances. My gut tells me Tiger will be around the leaderboard come Sunday.

George: Anytime Tiger tees it up at Augusta, he’s a threat to win. He’s built his game through the years to win at Augusta and he will be a major (pun intended) factor this year. Especially coming top fives in his last two events at the Valspar and Bay Hill. Phil can’t be overlooked at this point in the season either. Fresh off a WGC win in Mexico against a stacked field, his game is primed to win his fourth green jacket. I think we’d all be happy with these two guys in the final group on Sunday.

Grierson: The players who have won the Masters in the past have an obvious advantage over those who haven’t. Augusta National has always been a course where experience and knowledge can take you over the top. It means that players like Tiger and Phil, even Bubba, have to be considered favourites.

Lane: In my opinion, both have a very good chance of winning in 2018. Both Tiger and Phil have been close to the top of the leaderboard over the past month.

McNair: Tiger Woods and Phil Mickelson as sentimental favourites? Not yet. They can both still win and many still expect it to happen. Tiger seems to be back, or at least back to being a contender in the events he plays in. Phil just won recently, so that’s enough said. Sometimes I hear people say that they don’t want Tiger or Phil to win, but I’m not so sure I buy it. There’s no doubt in my mind if either of them were close to the lead on Sunday afternoon that those critics would be glued to their TV.

Napier: Yes, without a doubt, both of them have a chance this year to turn back the clock and win another Green Jacket. With Phil winning recently and Tiger being oh so close, I wouldn’t be surprised if either one was right in the mix. I would love to see how well the older nerves hold up because you have to think they would feel immense pressure.

Sewards: I think no one can overlook Phil for this Masters, coming off a WGC win and a whack of top tens this season… he is looking to ignite some Augusta Magic and take his 4th green jacket… plus he’s a lefty!

Almost all of the world’s top players have already won this season or posted a number of Top 10 finishes. In other words, the best players are all playing their best. Who’s your pick to win the 2018 Masters? And if the winner isn’t one of the top ranked players, who’s your longshot or sleeper pick?

Belacca: I too often pick a winner from the heart and as every other year, my hopeful pick is Rory McIlroy. I actually had to check to see if he was rated in the top ten of OWGR. As my current favorite golfer, I will be rooting hard for Rory to get the Grand Slam. His win at Bay Hill certainly validates him as a pick that is coming in at the top of his game and not just a sentimental favorite. Go Rory!

George: You could roll the dice on any of the top players in the world and feel good about your pick for the Masters. My pick this year is Rory McIlroy. Another recent winner at Arnie’s event, he’ll keep his putter hot and complete the career grand slam.

Grierson: My pick to win the green jacket this year has to be Phil Mickelson. As a fellow lefty I have to cheer to him to take on Tiger head to head on Sunday in an epic battle that we never thought we would ever see again. My longshot has to be Canadian Adam Hadwin. Got experience last year in his first Masters and is an underrated ball striker. Go Canada Go!

Lane: Jordan Spieth showed his game is coming around and perhaps the greens at Augusta are just the ticket to turn around his putting for the win. I’m hoping Tiger can be classified as a long shot because I think he has a good chance.

McNair: My pick for the 2018 Masters is Tiger Woods. I’m a sports fan, and I appreciate the superstars. All of our major sports need these superstars. Gretzky & Crosby, Jordan & Lebron, Montana & Brady, Palmer & Nicklaus, DiMaggio & Jeter, Navratilova & Williams. There’s no debate, they are special, and they validate our sports. The toughest tests should be won by the best. Longshot winners are OK, kind of like a one hit wonder on the radio where they become an interesting trivia question versus a real impact on the sports we love.

Napier: After finding a Putter that agrees with him, I’m going with Rory McIlroy to win this year. Although I’ll be cheering Mickelson.

Sewards: I have to go with Phil. He’s playing great and he loves Augusta… he always plays inspired there… and now he has the game to back it up. But for my longshot… I say Ryan Moore will have a great week, I see a top ten… and maybe he grabs the jacket when it’s all done!