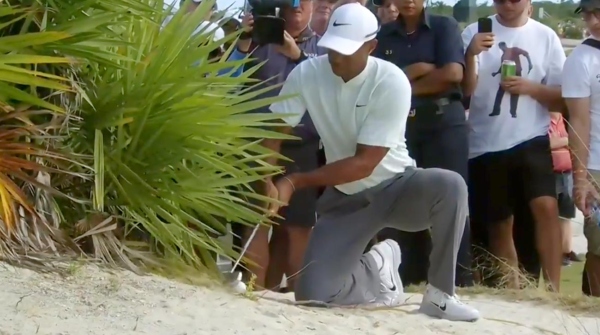 Although it is played on a stunning golf course and features 18 of the best players in the world, the Hero World Challenge tends to be somewhat of a banal viewing experience every year. This year, however, golf fans that watched the second round of the event were treated to a bizarre rules controversy involving tournament host Tiger Woods and a thick palm bush on the 18th hole.  After missing the fairway wide right into said bush with his tee shot, Woods chocked up on a short iron, got down on his knees and hacked his ball back toward the fairway.

From there he went on to miss the green with his third shot and ultimately came away with a double bogey. Prior to signing his scorecard, however, Woods watched several HD replays of the shot to determine whether he struck the ball twice—an action that would have violated Rules 14-1 and 14-4, meriting a two-stroke penalty. Woods observed that he did, in fact, hit his ball twice when punching out of the bush. But because the transgression was not discernible to the naked eye and because Woods thought he struck his ball cleanly, no penalty was assessed. “In this age of high-definition slow-motion television, we’ve got a decision at 34-4/10, Limitation on Use of Video Evidence,” read a statement released by PGA Tour VP of Rules and Competition Mark Russell that evening. “Basically it says if the player did not know that he did that and the only way you can tell that is by using this type of slow-motion technology, he’s exempt from the rules [14-1 and 14-4].”

It will be a major letdown if Ho-Sung Choi does not receive at least a few sponsorship exemptions onto the PGA Tour this season. The South Korean, whose unconventional golf swing garnered the attention of the golf world in June when he nearly qualified for The Open, picked up his third win as a professional two weeks ago in Japan. Choi edged Aussie Brendan Jones by a single stroke at the Casio World Open, displaying the same unbalanced “fisherman’s swing” throughout the event that had earned him internet celebrity status over the summer. Here’s Choi, tied with Jones at -14 on the 72nd hole of the tournament, reaching for a little extra on his tee shot before nearly falling flat on his face in his follow through.

You would never expect it from that finish, but Choi actually split the fairway with that drive. It set up a 3-wood swipe so mighty that his knee somehow touched the ground after he impacted the ball.

At 45 years old, the journeyman is obviously no spring chicken. But, all of a sudden, Choi has finished T-18 or better in four of his last six starts and has vaulted to a career-best 209th in the world golf rankings. If anyone deserves a sponsorship exemption in golf at the moment, it’s this guy. Not only is he currently playing some of the best golf of his life, North American fans legitimately cannot get enough of him. And for good reason … the guy is a blast to watch!

We would gladly trade any future Tiger vs. Phil matches for some more Ho-Sung Choi in our lives. Let’s make it happen!

John Senden completely whiffed on his tee shot at the Volkswagen Scramble over the weekend when his driver shaft snapped in two underneath the grip.

That’s a lot of torque! The Aussie might want to consider reducing the number of bicep curls he does each week going forward to prevent a similar incident in the future.

Very impressive, but we don’t suggest trying this on the driving range at your home course.

Who put that tree there?!

Tip from The Golf Lab:

Hit the ball straighter and more consistently with this tip from The Golf Lab.