The Shag Bag: He Played How Many Holes?! 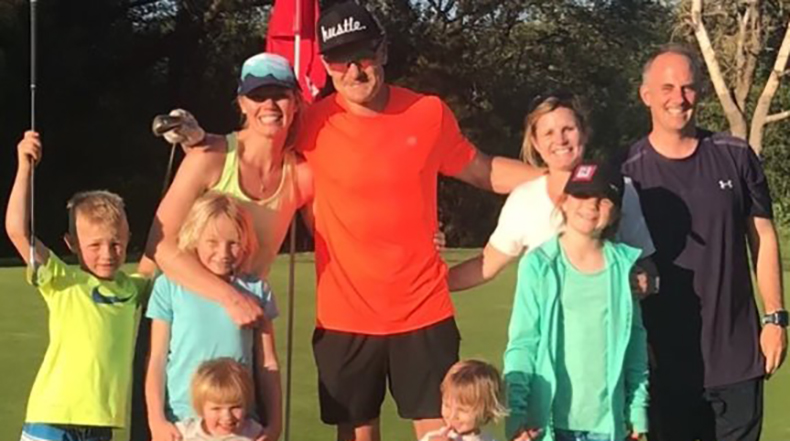 Former Oakland Athletics outfielder, and current MLB Network analyst, Eric Byrnes broke a Guinness World Record for most holes golfed in a 12-hour period last week when he crammed 245 holes into a single day at Napa Golf Course in California. Incredibly, Byrnes used only one club, an 8-iron, throughout each of his 13.5 rounds and ran the entire time, logging a preposterous 65.5 miles over the course of the day.

In doing so, Byrnes raised more than $5000 for non-toxic lymphoma. His strategy for getting in as many holes as possible was unique. Instead of slowing down for each shot, Byrnes purportedly just swung his golf club one-handed at the ball as he ran up to it. That allowed him to maintain a swift pace without his muscles tightening up from the constant stoppages. In fact, the only times that Byrnes actually focused and aimed during his marathon golf session was on the greens and the tee decks, which makes sense considering how much extra time he would have tacked onto his rounds with poorly-weighted putts and errant tee shots. There is no official score for any of Byrnes’s rounds, but he estimates that he took approximately seven shots per hole for a grand total of 1715 shots - which is pretty darn good considering he was essentially playing polo with a golf ball for 12 hours!

Patrick Reed revealed prior to the Wells Fargo last week that it wasn’t his clubs or his shoes that earned him his first green jacket last month, but rather a trip to the optometrist the previous week to get his eyes examined. Reed explained that his wife forced him to go get a check-up after noticing that he couldn’t even read the text clearly on their television at home. “So we went to the eye doctor and next thing you know, I could see up close,” said Reed. “But I can’t see anything past about 30, 40 yards; everything’s really blurry. So I got a prescription for contacts, put them in and all of a sudden I’m looking out like ‘wow, I can see everything!’” Reed wore contact lenses at Augusta National for the first time in his career and saw immediate results in all aspects of his game, but none more so than with his flat stick. Prior to the Masters, Reed was ranked 75th on the circuit in strokes gained with the putter, sporting a woeful 0.163 average. At the Masters, however, that number skyrocketed to an average of 1.98 for the week, which ranked him third among all competitors on some of the most difficult greens in the world. Clearly, his game got a big boost from those lenses. But as Reed explained, it was no picnic putting them onto his eyes at first. “It would take me 30 minutes to 45 minutes to get them in,” Reed recounted. “Now it’s easy, but waking up 15 minutes before you leave that first week at Augusta – no chance! It was wake up an hour before and spend 45 minutes [putting them] on my eyes.”

A golfer in Florida captured an incredible moment on film last week that depicted a sand hill crane escorting a baby alligator across a fairway. According to Eric Drexler, who filmed the video, the crane was actually protecting its own wife and child nearby. And it did so by hissing at the gator and spreading out its 6-foot wingspan to prevent the creature from making any attempts toward its family.

When you come this far over the top in your transition, you’re going to top and duff your fair share of golf shots. So it’s not surprising that this guy’s ball embedded itself into the ground less than a foot away from the tee… but it sure is amusing!

Despite how good you think your sand game is, it’s still not better than this guy’s! We’ve watched this several times and we still don’t know how it is possible.