The Shag Bag: What is Phil wearing?! 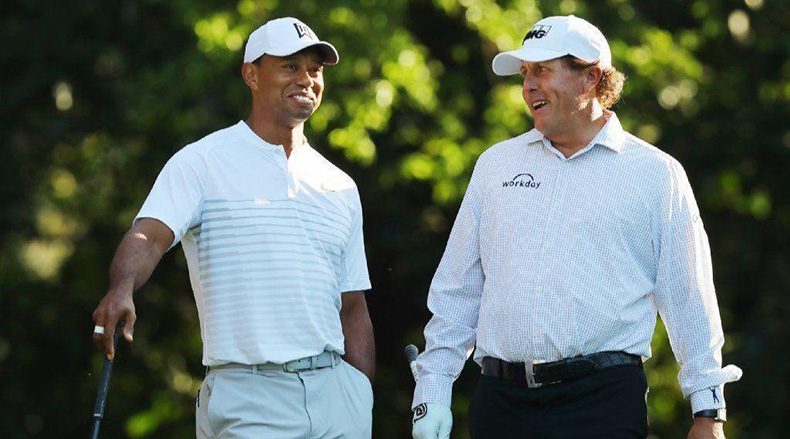 If you didn’t see the Players Championship last week, we believe that we can sum up the majority of the action for you in three storylines. Firstly, there was Phil Mickelson’s questionable attire choice on Thursday afternoon. Lefty opted out of his traditional look and sported this bizarre button down white shirt.

As you can imagine, Mickelson was ridiculed mercilessly on Twitter.

Tiger Woods did not get off to the start he was hoping for at the Players with rounds of 72 and 71 on Thursday and Friday. But he made the cut by a single stroke, and rebounded brilliantly on Saturday morning with the best 9-hole performance of his career at TPC Sawgrass. Woods birdied four of his first five holes and poured in two more on 7 and 9 to make the turn in 30 total strokes.

And he kept his momentum going on the back nine with birdies on 11 and 12 en route to a 7-under 65, catapulting himself into a tie for ninth place at the end of play on Saturday.

Unfortunately for Tiger, Webb Simpson was sizzling hot all week long at the Players Championship and could not be caught by anyone in the field. The 2012 U.S. Open winner opened his week with an impressive 6-under 66 on Thursday and then took his game to another level on Friday, tying the course record with a 9-under 63. Simpson made an eagle, three birdies, and five pars on the front nine to make the turn in 31 strokes, and then exploded on the back nine with a string of six straight birdies on the back, beginning on the 11th hole.

The fifth of his six-straight birdies, and a worthy winner for the #ShotOfTheDay. pic.twitter.com/sxbaSuWHsY

In fact, Simpson was on pace to shoot a 59 as he made his way to the 17th green. And he probably would have done it had it not been for that pesky island green.

The highest of highs.
To the lowest of lows.

Simpson continued to dominate and make ridiculous shots on Saturday and by the end of play on Moving Day, Simpson was seven shots clear of the field. That massive lead allowed him to cruise to his first Players Championship title on Sunday afternoon.

Luck was not on the side of Cristian DiMarco at a U.S. Open local qualifier last week in Orlando. DiMarco, son of PGA Tour veteran Chris DiMarco, left the golf course after shooting an even-par 72, thinking that he did not have a chance to lock up one of the final five spots available for the 36-hole sectional qualifier on June 4th. And that is somewhat understandable, considering how the University of Southern Florida sophomore was nowhere near contention in the same tournament last year when he shot a 71. However, scores at this year’s local qualifier at Orange Tree Golf Club were nowhere near as low as they were last year. If DiMarco had just stuck around for a little while after his round, he would have known that he had tied for fifth overall with Louisiana State’s Luis Gagne. Incredibly, Gagne also bailed after his round, likely thinking that he too didn’t have a chance to move on to the next stage. This situation created quite the conundrum for tournament officials trying to determine which of the two players would advance to the next round. Normally, a tie is decided in a playoff on the golf course. But in the very unlikely event that neither player is in attendance, as was the case on Wednesday, the USGA mandates that a coin must be flipped to determine who gets the spot. Unfortunately, DiMarco lost that coin flip and will now be the first alternate at the Bear’s Club in Jupiter, Florida next month. “It’s a learning experience,” DiMarco told GolfChannel.com later that night. “I’m very disappointed in myself for leaving. But in the grand scheme of things, is it really going to make a huge difference in my career? I hope not. I hope I’ll play in many U.S. Opens.”

A Shot to Remember

During his practice round on Wednesday, Justin Thomas surprised a 12-year-old fan named Christian, who was in the gallery on the 17th hole, with an opportunity to hit the island green in front of a large crowd. Using Thomas’s club and glove — both of which were considerably too big for him — Christian hit a good shot and only missed the green by a small margin.

Afterward, Thomas took a picture with Christian and signed the glove for him to keep. However, that only seemed to cause problems for the young fan because the moment he returned to his family, his two older sisters informed him that he would be sharing the glove with them. “Didn’t you get a ball from Tiger?” Christian asked his sisters after learning of this new forced arrangement. “Yes, but we didn’t get to take a picture with him,” they responded. “Or hit a shot in front of like 8000 people.”

Prior to the Players Championship, brothers Wesley and George Bryan attempted a couple of impressive trick shots on TPC Sawgrass' iconic 17th hole. First, Wesley showed off remarkable hand-eye coordination as he struck a ball out of midair and onto the island green, before burying the putt for a birdie. George followed next, and one-upped his brother by making a birdie from the site of Golf Channel’s future Morning Drive studio, roughly 50 yards behind the tee box.

Webb Simpson was not the only one who tied a course record at TPC Sawgrass last week. Reigning U.S. Open champion Brooks Koepka shot a 63 on Sunday, highlighted by this remarkable albatross from 208 yards on the 16th hole.