The Shag Bag: The Most Dangerous Job in Golf? 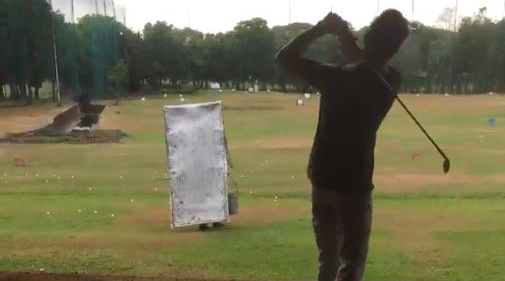 We’ve had some pretty unsafe jobs before, but even those were nothing compared to what the ball collectors have to deal with on daily basis at this golf course in the Philippines. As you can see in the clip below, these guys are shagging balls less than 30 yards away from the hitting area with nothing more than an aluminum board covering their backs and some sort of makeshift mesh protecting their necks and faces. If anyone has ever deserved a raise, it’s these guys!

If you think that you have tough competition at your club’s member tournaments, just be glad that you are not a member of Austin Golf Club in Texas! That is the home club of both Sergio Garcia and Ben Crenshaw, and last week the duo reportedly steamrolled the entire field when they teamed up for the club’s annual member-member tournament. To be fair, there was not much wiggle room for either player to have an off day. Garcia, who won the event last year, played to a plus-5 handicap in the tournament, while Crenshaw, who co-designed the course two decades ago, was registered as a scratch. And yet, those handicaps probably should have still been considerably lower, given that the pair has won a total of three green jackets over the course of their careers. We can only imagine how deflating it must have been for the unlucky pair that had to square off against those two all day long. Hopefully, that duo at least came away from the shellacking with a few hilarious stories about getting throttled by a couple of major champions.

It wasn’t all roses for Sergio Garcia last week in Texas. The Spaniard could not carry the momentum from his member-member victory at the Austin Golf Club earlier in the week into the Valero Texas Open, where he stumbled to an opening round 74 on Thursday. And things only got worse on Friday when Garcia followed up a bogey on the 4th hole with a vintage tantrum, and second-straight bogey, on the 5th. Garcia went for the green on the driveable par 4 and didn’t miss the putting surface by that much. But the shot was not up to the 38-year-old’s standards and he reacted by chucking his driver deep into the woods. It took Garcia close to a minute just to locate the club, and he was still so rattled when he eventually got up to his second shot that he shanked it right over the green. Garcia was able to mount a charge on the back nine, making three birdies in his final five holes to get back to even for the day, but ultimately came up just one shot shy of advancing to the weekend.

Won't be needing this. pic.twitter.com/xbe9abvCjn

Take Me Out To The Golf Course

New York Mets outfielder Yoenis Cespedes told reporters last week that he believes his time away from golf over the last year is to blame for his slow start at the plate this season. Cespedes has not set foot on a golf course or a driving range since last July when he was told that his near-daily golf rounds, prior to games, were beginning to affect his hydration and conditioning levels. However, what the doctors didn’t realize at the time was how the Cuban had been relying on golf throughout his career to break out of slumps and correct his swing plane. “I’m still lost [at the plate] and now I’m opening my shoulder wide open,” Cespedes, who is hitting a paltry .208 at the dish this season, told reporters last week. “When I was playing golf, I had to keep my hands inside and it helped me a lot.” Even though that sounds like a solid justification for a few golf excursions, we can’t help but think that the 2016 Silver Slugger Award recipient will face at least some criticism from Mets fans if he does decide to return to the links before games again. After all, it was only a few years ago that Cespedes infamously took himself out of Game 4 of the NLCS in the second inning with left shoulder tightness after playing a round of golf that morning. But if golfing is what Cespedes thinks will snap him out of his offensive drought, Mets fans might want to consider sending the 32-year-old a few sleeves of Pro-V1s in the mail to speed up the process!

On one hand, this has got to be the coolest swing-training aid ever created. On the other hand, it’s the last device that we would ever want to be strapped into if the robot revolution was to suddenly occur.