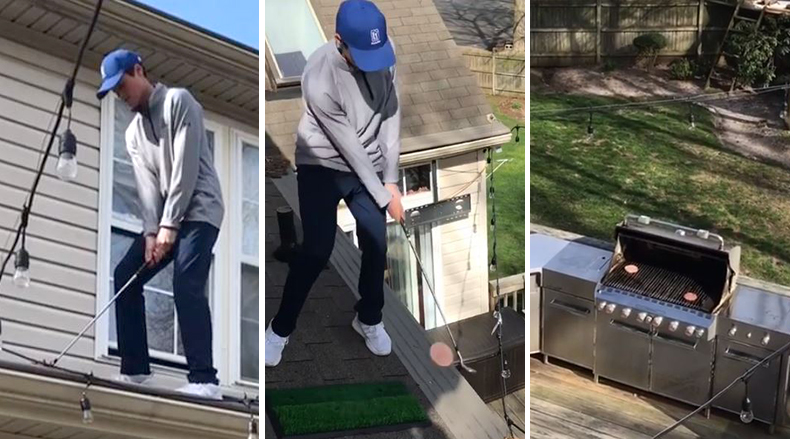 It was a tale of two very different rounds for the duo of Zecheng Dou and Xinjun Zhang at the Zurich Classic last week. The pairing got off to a blistering start on Thursday at TPC Louisiana, firing off a 12-under 60 in the better ball format to tie Lucas Glover and Chez Reavie for first overall after the opening round. But the Chinese duo struggled mightily in Friday’s alternate shot format, and eventually missed the cut after shooting an 8-over 80. Dou and Zhang didn’t play too badly on the front nine, making the turn with a combined 38 shots after offsetting their first of two birdies on the day with a bogey and a double. But things went south in a hurry starting on the 10th hole when they made a string of five bogeys in a six-hole span. The pair recovered temporarily with a birdie on the par 4 16th, but gave that stroke — and one more — right back with a double bogey on the next hole when they needed four shots to get the ball in the cup from just off the green.

After being the last group out yesterday evening in New Orleans, Dou and Zhang had a rough Friday morning. 60-80. pic.twitter.com/mfvT0hlJ3n

To be fair, the second round was not particularly pretty for most of the field. A total of 34 other teams shot rounds of three-over-par or worse including the American duo of Ryan Blaum and Blayne Barber who also shot an 80. However, only Dou and Zhang managed to post a 20-shot discrepancy between their first two rounds… although we really shouldn’t be poking too much fun at the pairing because our own personal scores from round to round tend to vary even more than that!

The PGA Tour should probably consider changing the name of the Zurich Classic to the Gator Classic because those scaly monsters got nearly as much camera time as the players did throughout the tournament. On Thursday, Talor Gooch opted to take free relief out of a fairway bunker on the 18th hole after noticing that a gigantic and feisty gator had positioned itself just a few feet from his ball. Officials tried to scare it off by throwing a rake in its direction, but the gator just responded by chomping down on it!

"I like my life. I like it with all my limbs. So I stay away from those things."
- @TalorGooch

Later that day, officials figured out that they could shepherd the gators back into the ponds by slowly driving golf carts towards them.

There were a great deal more gator-related moments at the Zurich Classic — too many, in fact, to list in this one post. But none was more entertaining than the staring contest that Ryan Palmer got into with a gigantic alligator on Friday while searching for his ball on the 16th hole.

This guy isn’t decelerating at impact as much as he is stopping his momentum completely prior to impact. On the flip side though, he did square the ball up pretty effectively!