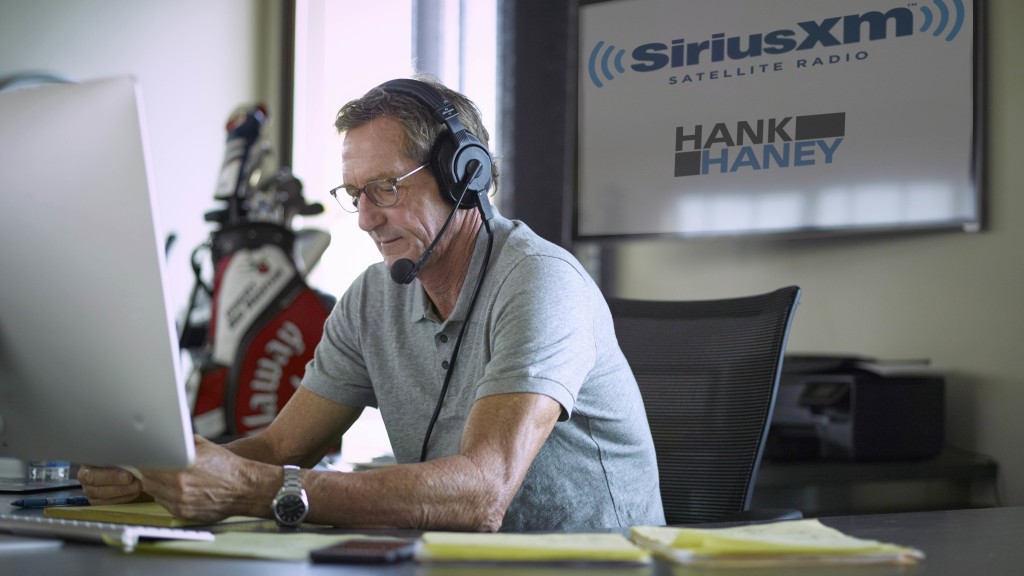 Hank Haney was suspended from the SiriusXM PGA Tour radio show last week after making some disparaging, racist comments about the LPGA Tour. Asked who he thought would win last week’s U.S. Women’s Open, Haney replied, “a Korean,” before adding: “I couldn’t name you six players on the LPGA Tour. Maybe I could. Well, I’d go with Lee. If I didn’t have to name a first name, I’d get a bunch of them right.” Haney’s words did not sit well with a number of professional golfers from both the men’s and women’s sides of the sport, including Michelle Wie, who drew attention to the 63-year-old’s remarks with this tweet: 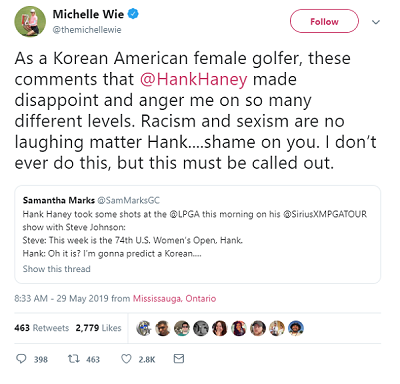 The PGA Tour responded by distancing itself from Haney’s comments and suspending the golf instructor from its SiriusXM channel indefinitely. 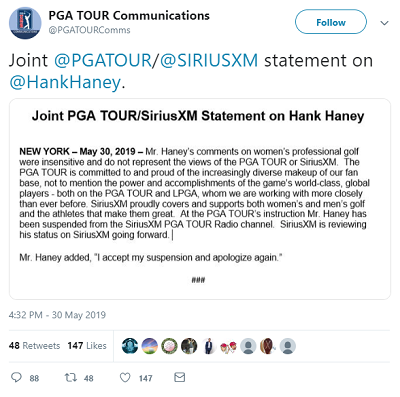 Haney apologized later that day on Twitter, alleging that he was just trying to make a point about how dominant the Korean women have become and that he has the utmost respect for the women’s game and its players. But Tiger Woods, who employed Haney as his swing coach for six years before the pair broke up in 2010, wasn’t buying his former instructor’s attempt to save face. “He obviously said what he meant, and he got what he deserved,” Woods said following his second round at the Memorial. “Just can’t look at life like that.”

Kuchar got into a bizarre and agonizing, 10-minute argument with several rules officials in his opening round at the Memorial on Thursday after hitting his drive into a pitch mark on the 17th fairway. Kuchar wanted to take relief from the mark, claiming that his ball was stuck in a second pitch mark inside the original divot that his ball had created when it landed. PGA Tour rules official Robby Ware, who was walking with Kuchar’s group, said that it would have been impossible for the ball to be stuck in its own pitch mark because it rolled after it impacted the ground. Kuchar replied by asserting that his ball didn’t roll, but rather hopped up and down after initially landing in the pitch mark. Not buying any of Kuchar’s nonsense, Ware brought a Golf Channel cameraman inside the ropes to replay the shot for them with the hope of settling things definitively. Unfortunately, we do not have any footage of the shot to show you, but we watched the replay at the time and can tell you that it was obvious Kuchar’s ball did not do what he was alleging. That footage should have been the end of the discussion, but Kuchar was still not satisfied with Ware’s decision and called for a second opinion. Fellow rules official Stephen Cox arrived on the scene a few minutes later, looked at the ball in the divot and agreed with Ware’s ruling, much to Kuchar’s dismay. Kuchar then tried to get Cox to watch the replay, but the official refused. “I don’t need to look at it, Matt,” Cox said. “The guys have already seen it on TV. Let’s get back into play.” Kuchar then asked for a third opinion, which was denied, before going on to make a humdrum par on the hole. The entire discussion was ridiculous and made for a terrible 10 minutes of viewing that we wish we could get back. After the round, Kuchar was unapologetic. “I only asked for a second [opinion] because I thought there was potential and thought, you never know; you may get someone else who says there is potential for that to happen and we need to look further into that.”

Strike of the Week

This week’s best strike was this lightning bolt that hit, and momentarily ignited, a tree on the 18th hole at the U.S. Women’s Open during a weather delay. The strike was so loud that it apparently caused multiple members of the media in a nearby tent to duck for cover. 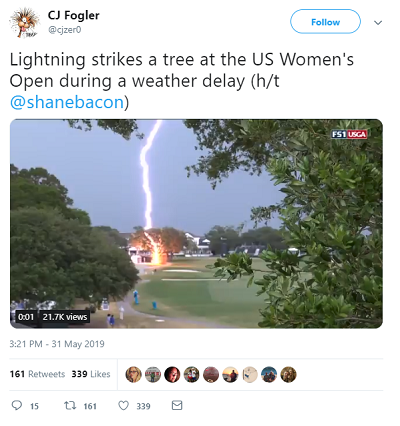 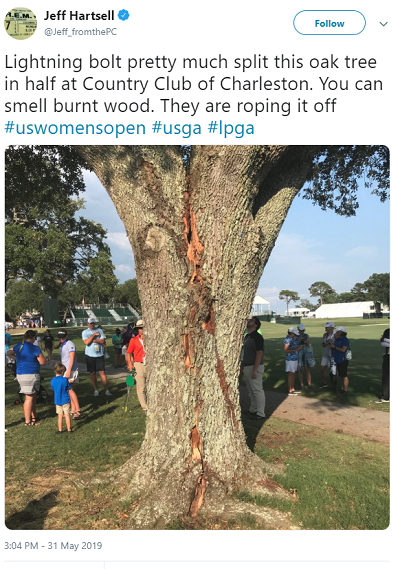 Chip of the Week 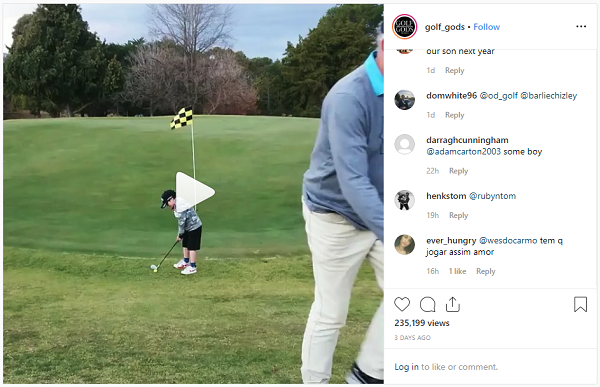 This instant contender for trick shot of the year is so impressive that we watched it over last week and showed it to everyone we know. 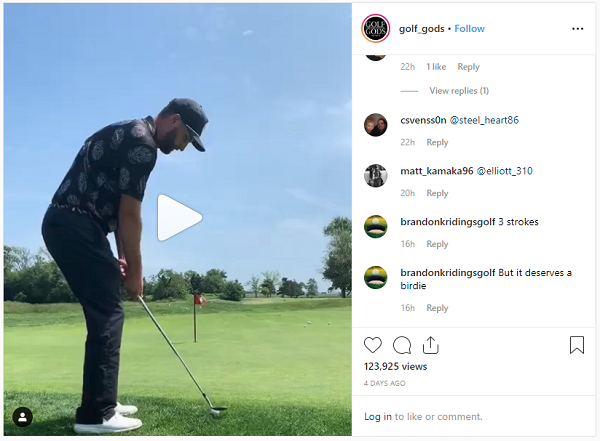 Golf Animals of the Week

These golfing bears couldn’t agree whether to pull the flagstick or keep it in! 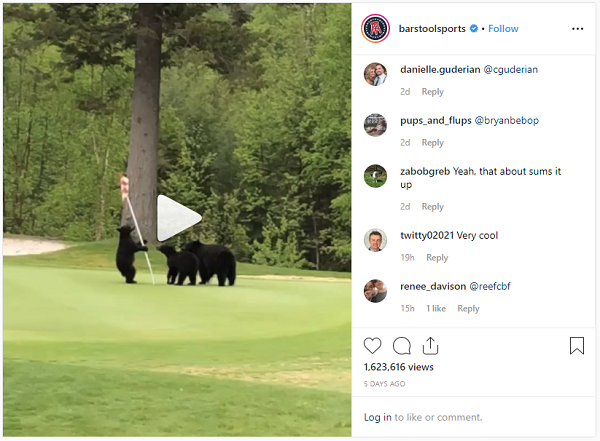