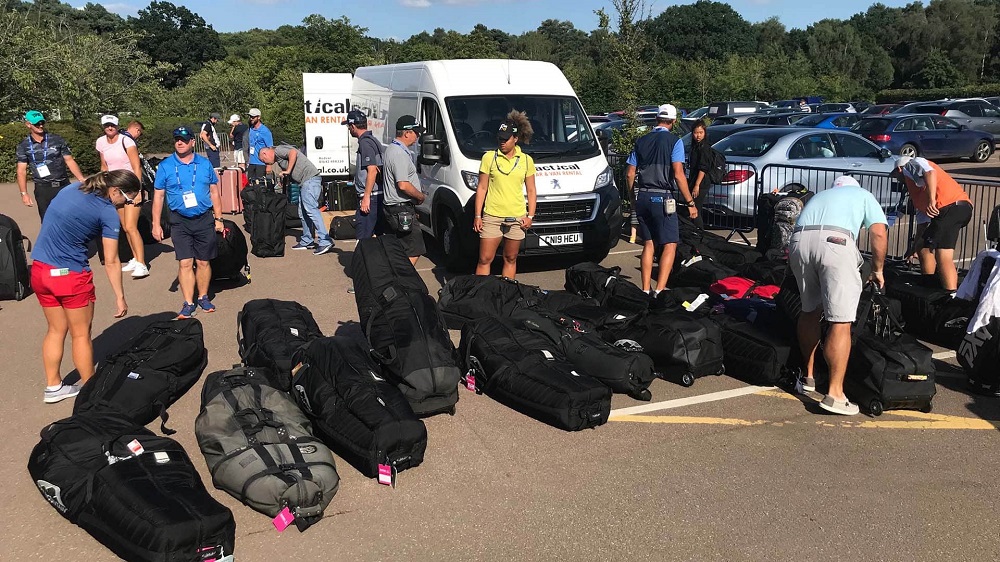 One honest mistake by Lexi Thompson after last week’s Evian Championship caused a chain reaction of problems for herself and for a considerable portion of the LPGA Tour. Thompson and company were scheduled to fly straight from France to England for the Women’s British Open, but the American reportedly forgot to take her passport out of her golf bag. Unfortunately, Thompson’s bags, as well of those of her competitors, were traveling to the event separately in a rental van driven by former tour caddie and current LPGA Tour employee, Ian Wright. Wright was already two hours en route when he received the call that Thompson’s caddie, Benji Thompson (no relation), was cabbing out to him to retrieve it, a round trip that ended up costing $300 Swiss francs. In the meantime, Wright pulled over to the side of the road and unloaded the contents of the van, some 40 sets of clubs and other equipment. “I think I might have screamed,” Wright told reporters. “That van was packed to the hilt; a mouse couldn’t have found room to live in there.” The entire incident, including the repacking of the van afterward, cost Wright three hours and ultimately caused him to miss a ferry to England and then get stuck in rush-hour traffic. He finally arrived at the course at 5PM on Monday but the course was already closed for maintenance by then and all 40 players waiting for their clubs, including Lexi, missed their opportunities to play practice rounds. Despite all of the hullaballoo, Thompson played well all week, finishing in a tie for 16th at 7-under par. 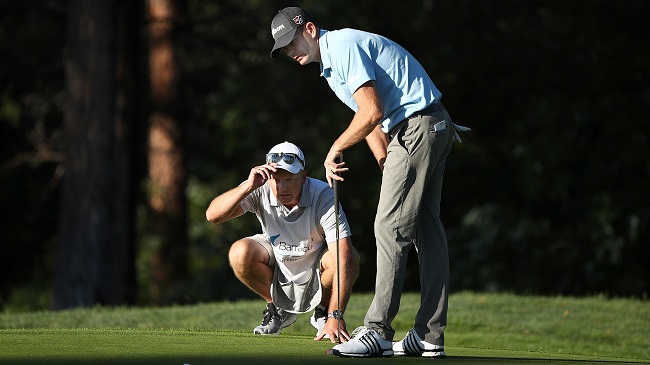 Speaking of silly and avoidable mistakes, we’re not really sure what exactly Brendan Steele was thinking in the second round of the Wyndham Championship. Steele, who had a disappointing 2018-19 season, needed a top-3 finish last week to qualify for the playoffs, and he didn’t do himself any favours with an even par 70 on Thursday. Things got even worse on Friday, as Steele opened with a double bogey on the 10th hole, a bogey on the 11th, and another bogey on the 12th. On the next tee, Steele asked his caddie to check his alignment with his alignment sticks. After using the sticks to confirm that he was aimed correctly, Steele was informed by a nearby rules official that he had accrued a two-stroke penalty for breaching Rule 4-3, which prohibits players from using training or swing aids during competition. In case you were wondering, Steele would not have incurred a penalty had he used a regular object, such as an umbrella or a golf club, to align himself. But it is a little confounding that a PGA Tour veteran, like Steele, would either not know or forget that you can’t use a training aid during play. 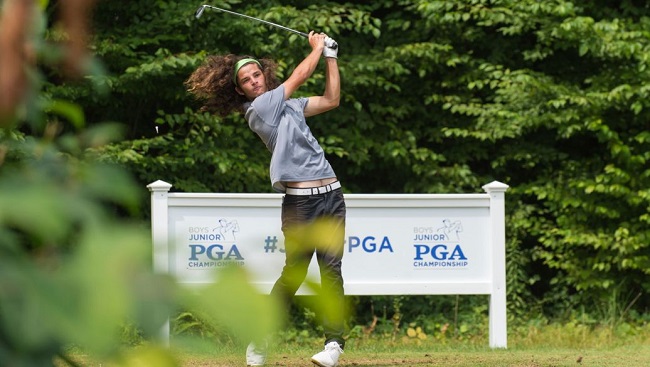 If you were to ask Academy and Emmy Award winning director David Frankel what his proudest accomplishment is, we suspect he’d say it would be son, Jake Beber-Frankel, especially after the performance the 17-year-old threw down at the 44th Boys Junior PGA Championship. Like a harlequin romance protagonist, he fired off the low round of the week, a 10-under 60 that shattered the Keney Park course record and the record for the lowest single-round score in the history of the event!

Golf phenom Akshay Bhatia, who is set to make his professional debut at the Safeway Open in September, still holds the record for the lowest single-round score-to-par with his 11-under 61 in the event last year. The Stanford commit’s incredible round vaulted him into a tie for second place after 36 holes. A third-round 65 gave Beber-Frankel a two shot-lead heading into the final round, but a 71 in the finale ultimately dropped him into solo fifth place for the week. Either way, it was an incredible showing from the long-tressed Beber-Frankel and we’re excited to see what the future holds for the young man.

Somebody get this poor kid a helmet! Ouch! 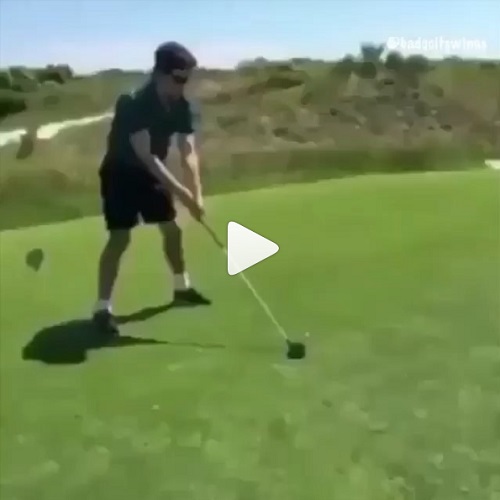 The unfazed look of his playing partner as this guy’s ball trickles dead left toward the adjacent green is priceless. We suspect this wasn’t the only shank this guy had on the course that day. 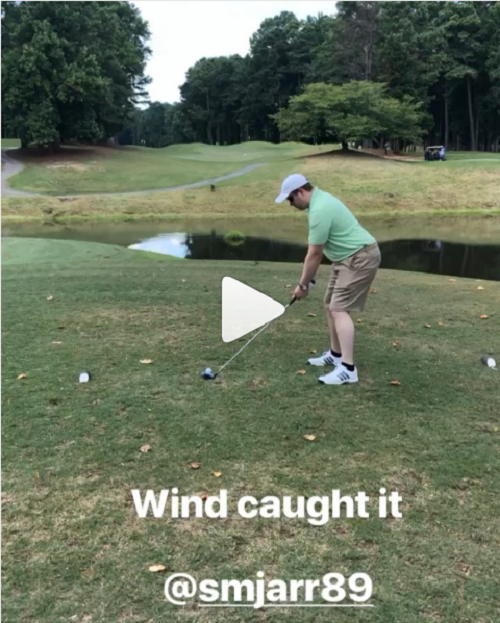 Talk about adding insult to injury... 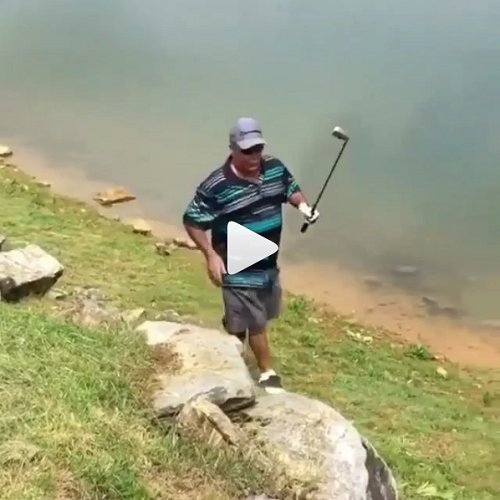 No matter how poorly you played over the weekend, just be thankful that you weren’t paired with this guy . . . 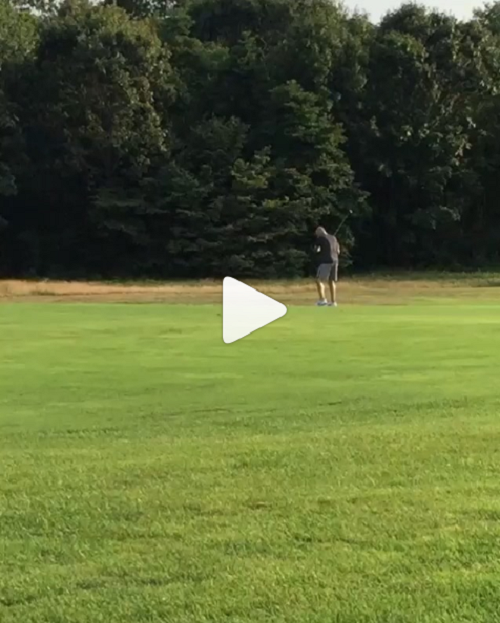