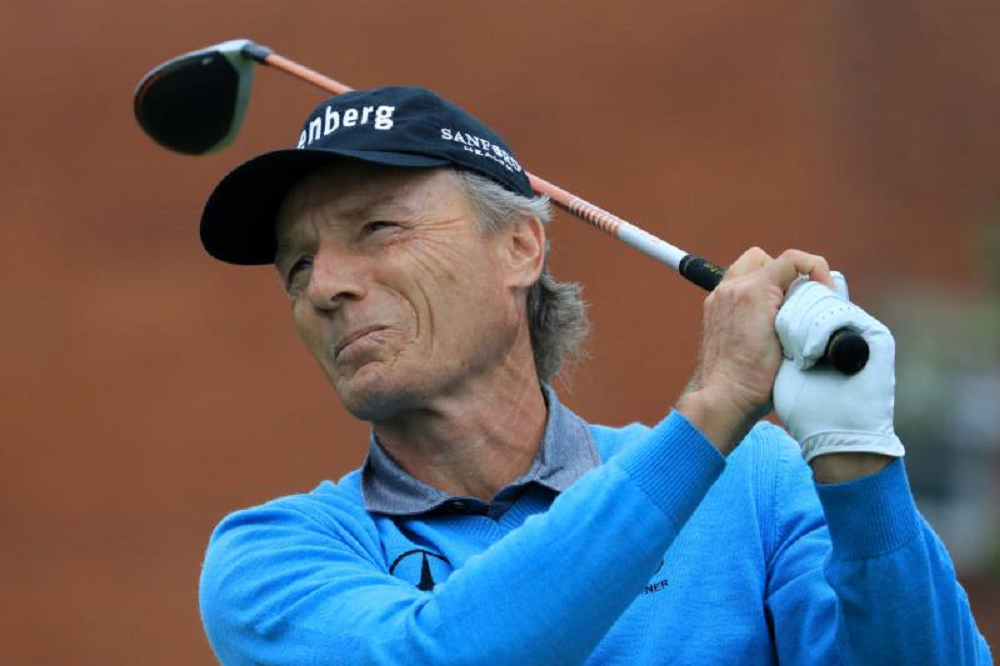 Forget Tony Stark or Cal Ripken Jr.; Bernhard Langer is the real iron man. The German won his 11th senior Major Championship on Sunday at the Senior British Open, defeating Englishman Paul Broadhurst by two strokes. Langer, who will turn 62 in August, came into the final round at Royal Lytham & St. Annes trailing Broadhurst by three strokes but only needed seven holes to erase that deficit. A birdie on 9 gave Langer the outright lead and he didn’t look back, firing off an even par back nine that included a quadruple-breaking 50-foot birdie putt on 14 to claim his record-breaking fourth Senior British Open title. 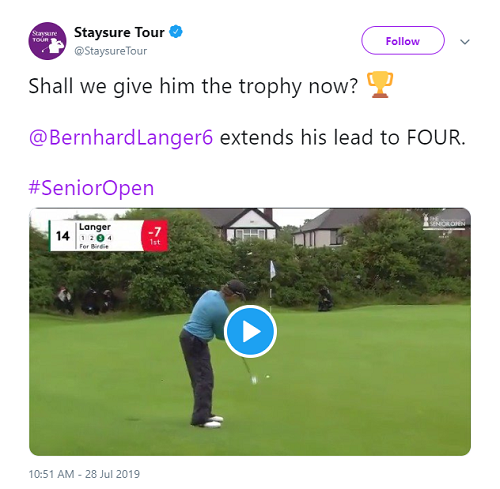 Langer has now won 40 times on the senior circuit and has recorded at least two victories in each of the last eight seasons! “I love holding this trophy; it’s a beautiful one,” Langer said after the round. “I never got to hold the Open Championship trophy, but this is the next best thing and I’m very blessed to have won four of these now.” 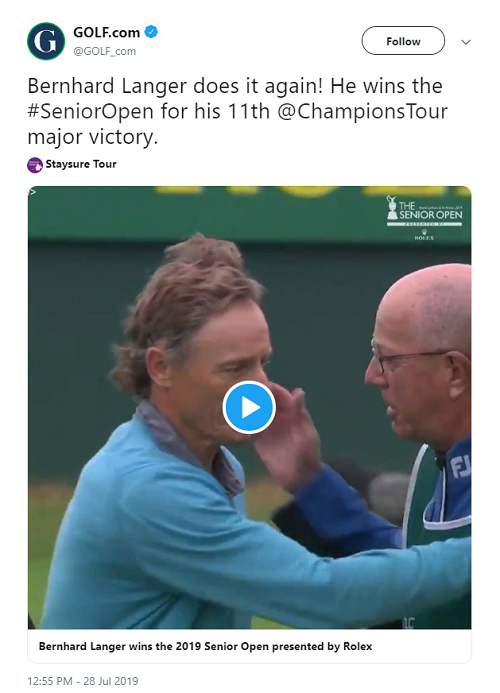 Ian Poulter had a spectator ejected from the gallery at the WGC-FedEx St. Jude Invitational on Thursday. The incident occurred during Poulter’s approach shot on the 18th hole, when the spectator yelled, “get in the bunker!” immediately after the Englishman made contact with the ball. Poulter responded by turning to the spectator and saying, “Really? You deserve to be here, do you?” before motioning to a nearby security guard to remove him from the crowd. “When we’re playing in a world-class event like we do week-in, week-out, and you’ve got guys like that in a small group who want to feel big in front of their friends and scream silly things out, it is disappointing,” Poulter said after the round. “I hate to do that but we shouldn’t be getting abused in this day and age.” If you’ve been following Poulter’s career, you’ll know that this was not the first altercation the 43-year-old has had with American spectators. At the Valspar Championship in 2016, Poulter reported a gallery member who had been heckling him to the man’s employer, which reportedly led to his dismissal from the company. 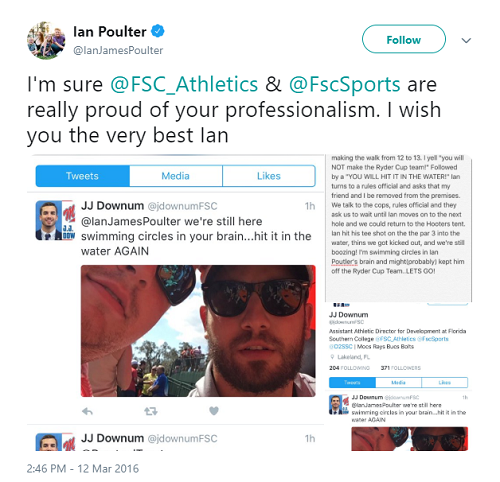 And at last year’s U.S. Open at Shinnecock Hills, Poulter blasted the boisterous New York fans for their poor etiquette and disrespectful behaviour throughout the event. 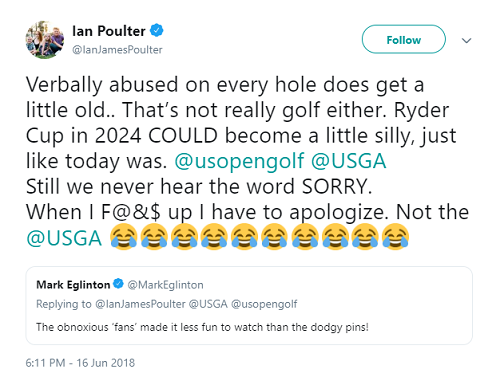 High school sophomore Kelly Xu pulled off the upset of the week in her debut at the U.S. Girls’ Junior, knocking 2017 Champion Erica Shepherd out of the event in the Round of 64 by a score of 3 & 2. Xu defeated Shepherd with a barrage of pars—16 in a row to be exact—while displaying a veteran’s composure on SentryWorld Golf Course. The strategy was so effective that Xu was up by four on her Duke-bound opponent after just nine holes, and easily held off Shepherd’s charge on the back to advance to the Round of 32. What made the victory even more impressive was that it was the first time Xu had ever competed in a match play event. The 15-year-old explained after her round that she had Googled the term “Match Play” the night before to learn the rules and a few strategies. “I definitely like playing it more than stroke play,” she said. Xu, who made international headlines as a 9-year-old in 2014 when she won the inaugural Girls 9-and-under division at the National Drive, Chip, and Putt Championship, continued her strong play into the Round of 32, defeating Yoona Kim 2 up, before ultimately losing 4 & 3 to Rose Zhang in the Round of 16. 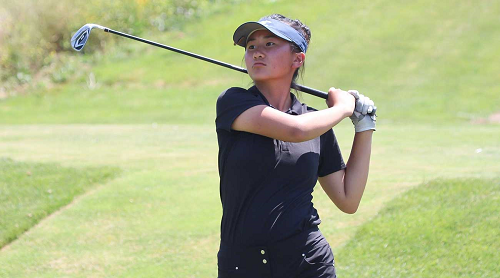 Miss of the Week

The cup on the 12th hole at the St. Jude Invitational shrank to the size of a bottle cap for Dustin Johnson on Thursday, as the No. 2-ranked golfer in the world lipped out two putts in a row from inside of three feet to make an ugly double bogey. Yeesh! 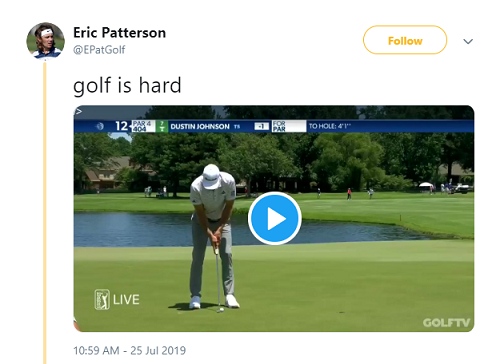 This two-hallway, around-the-corner double-bank shot found nothing but the centre of the cup. That’s one heck of a putt, kiddo! 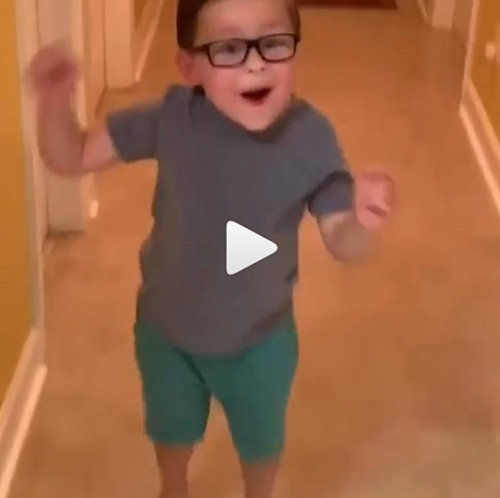 This guy is giving all new meaning to the phrase “blading a wedge”. We’re guessing this took more than one take . . . 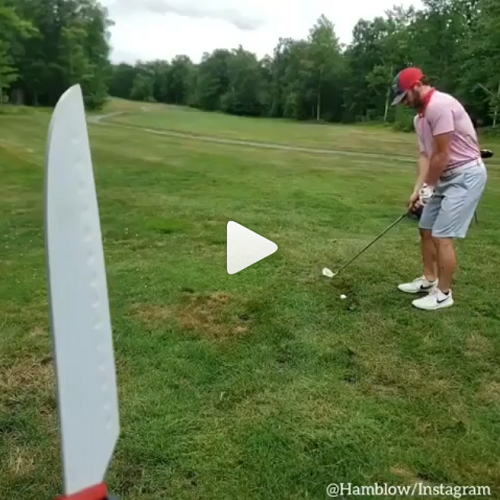 These amateur videos can be pretty silly. Ironically, they seem even funnier when you watch them a few times. This Happy Gilmore attempt has got to be one of the least successful ones we’ve ever come across: 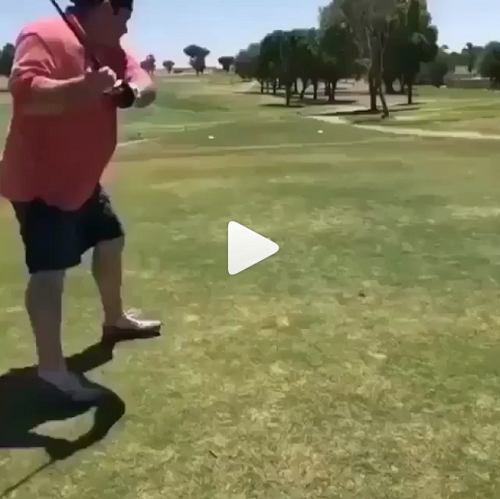