Is it a Major or Not? 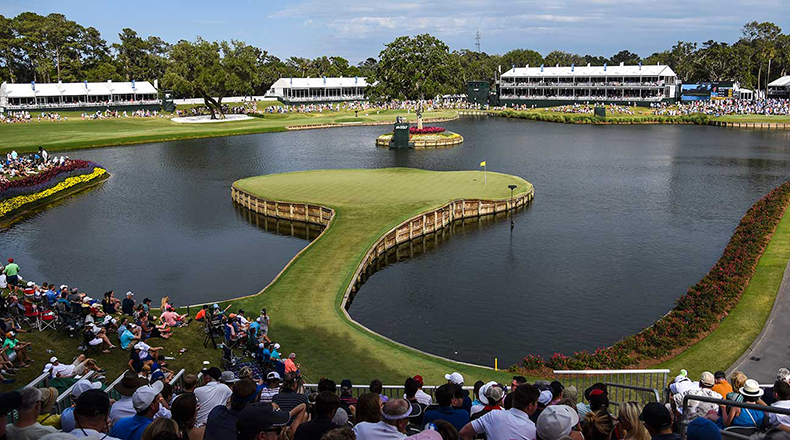 Former PGA Tour Commissioner Tim Finchem referred to The Players Championship as “the fifth major” but saying so doesn’t necessarily make it true. It has the strongest field of the year and is played on an iconic golf course but ….

Each year the strongest field in professional golf gathers at TPC Sawgrass to vie for one of the richest prizes on the PGA Tour and lay claim to what someday may become one of golf’s most heralded titles.

The Players Championship has all the lustre and excitement of a major: the players plan their season around it; TV treats it with the same kind of reverence they give the Masters; and golf fans mark it on their calendars as one of a handful of must-watch events of the year.

The golf course is a brilliant test. Pete Dye may have been at his most diabolical when he designed TPC Sawgrass. The course doesn’t favour any particular type of player and treats all with equal brutality. That’s what you want from a major championship venue.

So far, however, other than in the mind of former PGA Tour Commissioner Tim Finchem, the Players Championship is not officially a major.

There are lots of reasons it could acquire “major” status. Obviously for the reasons listed above but also because winning it conveys additional prestige on the winner way beyond a typical Tour event. The Players champion receives a five year exemption on Tour (same as majors) whereas winning a regular Tour event provides only a two year exemption; plus the Players winners also receive three year exemptions into the majors.

That prestige carries over into Hall of Fame voting too. A Players title doesn’t quite have the same heft as a major but is almost always mentioned as noteworthy on a player’s resume and one assumes that one or two Players titles swings some additional weight when it’s voting time.

There are recent World Golf Hall of Fame inductees who might not have earned enshrinement if not for a Players victory or two. Fred Couples, based on the numbers was a marginal candidate for the Hall of Fame but two Players Championships maybe helped tip the balance. Davis Love was another one hit wonder in the major category but his two wins at TPC Sawgrass made that a moot point.

Maybe the most important aspect of considering The Players Championship a major is the players themselves. They think of this tournament as their own. It’s the only event that is wholly owned and managed by the PGA Tour – their Tour. The USGA runs the U.S. Open; the R&A runs the Open Championship; Augusta National owns and manages the Masters; and the PGA Championship is a property of the PGA of America. But this one is theirs.

So what’s standing in the way of making it a Major?

Some will argue that there have always been four majors and that’s the way it should stay. Well actually, this whole idea of majors was conceived by golf writers Bob Drum and Dan Jenkins in 1960 when they started writing about a Grand Slam of Golf, featuring the current four professional majors. Before that, golf writer and historian O.B. Keeler had coined the term Impregnable Quadrilateral to recognize Bobby Jones feat of winning the U.S. and British Opens and Amateurs in the same year (1930).

The idea that golf has always had four majors is modern revisionist history. When Archie and Angus were batting their featheries across the Scottish moors, there were no majors, just golf.

Maybe this fixation on four is a concern that if a fifth is added what’s to stop a sixth or seventh? The LPGA went to five majors in 2013 when the Evian Championship was added. Some saw that as a rich sponsor buying their way into major status as the Evian had no history on the LPGA. It had been a major for the Ladies European Tour so it was not without some pedigree but a lot of purists objected to a fifth major. The rest of the golf world barely blinked.

The PGA Champions also has five majors – four that parallel the PGA Tour plus the Senior Players Championship. Shocking I know but it doesn’t appear to have caused any serious disruptions to world order either.

We live in an age of stats and records. One of the arguments against making the Players Championship a major is that it would require a rewriting of history. Do former winners Jodie Mudd, Tim Clark and Stephen Ames all of a sudden have one major to their credit? Do Rickie Fowler and Matt Kuchar shed the Best Player Never to Have Won a Major tag? Is the margin of majors between Jack Nicklaus and Tiger Woods now five because Jack has one more Players title than Tiger?

It doesn’t matter. When Hogan Snead and Nelson were winning Masters titles in the 40’s and 50’s, they didn’t think of them as majors. That came years later when modern golf historians began applying labels.

Any Tour can call any tournament a major based on purse size or strength of field or any other reason they deem acceptable, Ultimately though, history will give appropriate weight to each event and judge it based on the champions it produces and the prestige that surrounds it. By all reasonable measure, The Players Championship has already earned major status.

So let’s call it what it is. The Players Championship is a Major.