Putting New Kids on the Block 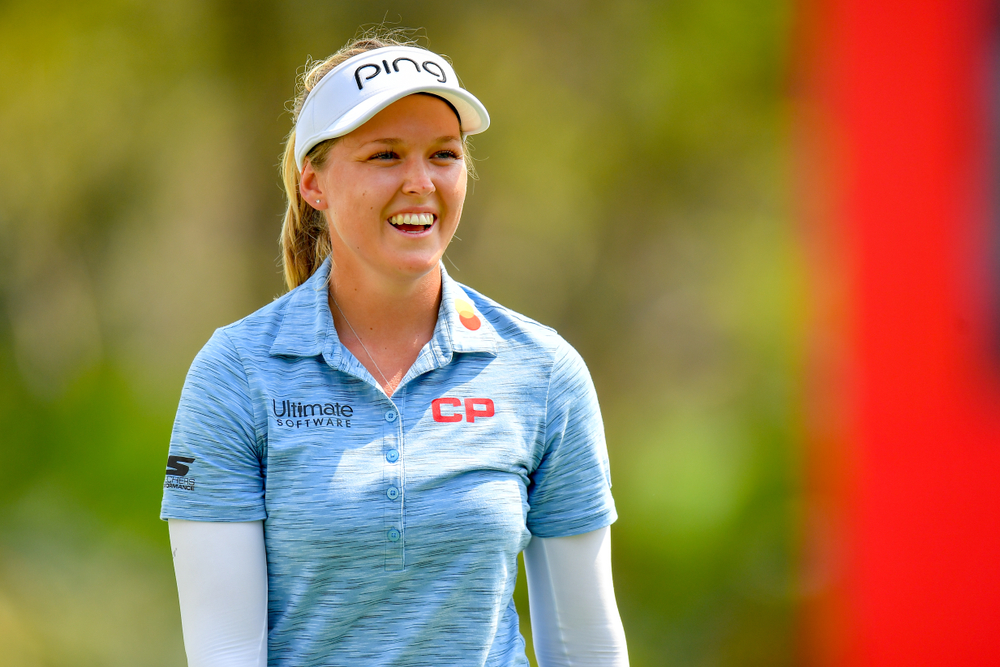 After the tragic tornados that struck the region last year, Ottawa-Gatineau residents have been forced to forge through a once-in-a-century bout of flooding this spring. Except that this would be their second 100-year flood in the past three years.

And Eagle Creek Golf Club was among those feeling the effects last Tuesday. Having just opened the previous week, the Dunrobin, Ontario ClubLink facility was restricted to 14 holes due to excessive water for the 12th annual Kevin Haime Kids to the Course Classic.

And it was another cool, drizzly morning that greeted guests of Haime’s 120-player sellout event May 14. But cutting through that steely grey weather was the 400-watt smile of Canadian star Brooke Henderson, making her fourth straight appearance at the fundraising tournament. Having recently garnered her eighth LPGA Tour victory, tying Mike Weir for the most professional wins at golf’s highest level for a Canadian tour player, the 21-year-old Henderson and older sister/caddie Brittany conducted a series of Q&A sessions and a pair of clinics for participants and guests.

“Brooke does about four outings like this a year with Ping Golf, and this is her only one in Canada, so that shows you what they think of this event,” observed Haime, the multi-award-winning PGA of Canada junior leader, whose tourney raised a whopping $72,000 this year. That brings the 12-year total to around $625,000—funds that, by the end of the season, will have helped purchase approximately 700 summer memberships to Ottawa-area courses, including Eagle Creek and Kanata GC, for youngsters aged 10-17, gaining them exposure to high-end facilities, junior programs and coaching.

The concept—one that identifies upstanding juniors with a passion for golf and subsequently provides them with a unique opportunity to mature their games as well as their character—is something that Henderson truly appreciates. “This event is really amazing,” beamed the Smiths Falls, Ontario native between clinics. “They raise so much money and give so many kids the chance to play golf and to chase after their dreams—to pursue scholarships or play in junior events they otherwise wouldn’t have the chance to do.”

A PERFECT FIT
As a Ping staff player—one with close ties to the area and the organizing team—the Kids to the Course Classic has been a natural fit for Henderson. “Ping has been such a great partner to this event, and me being an ambassador with Ping, it was a really easy decision to come here and help out Kevin Haime with this initiative, to help the juniors and hopefully inspire a few to pick up the game. Dave (Ping Canada General Manager Dave Wilson) is a great friend of ours, and we’ve known Kevin since I was young as well, so it all came together. And it just keeps getting bigger and better. We have to keep an eye on the (LPGA Tour) schedule, but it’s worked out that we’ve had this week off the past four years.”

Haime, cornered for 10 minutes amid his myriad of tournament-organizing activities alongside his wife Lisa, recalled the genesis of the initiative. “It was about 13 years ago and ClubLink and said, ‘We’d like to do an event in the west end of Ottawa. If you do it, you can choose the charity.’ I said, ‘I don’t really have a cause, but one of the greatest things that ever happened to me in my life was growing up at the Hunt Club and playing golf. So how do you feel about ClubLink helping to grow the game by buying memberships for kids to chase their dreams and have the summer of their lives?’

“So we had the golf sponsor,” Haime says. “But we also needed a corporate partner. Lisa and I were at a PGA of Ontario buying show in Toronto, and there was a little cafeteria off to the side where you could get a cheap piece of pizza and a coffee. I went up to Dave Wilson and told him, ‘Lisa and I are looking at doing a junior golf initiative,’ and Dave, without missing a beat, said, ‘If you’re in, I’m in.’ So Lisa and I looked at each other after we left the show and said, ‘I guess we’re doing this!’”

“Growing up as a kid and getting access to play golf is a big challenge,” says Wilson, whose company also sponsors Canada’s top male player, Corey Conners, as well as both of Golf Canada men’s and women’s national team coaches, Derek Ingram and Tristan Mullalley. “I was fortunate in that I was in a caddie program at Oshawa G&CC. So I got to play that course on Monday mornings, and I eventually got a job there. So I realized, being around golf since I was a teenager, that this concept was spot on. And Kevin and Lisa were willing to organize it, to bring the folks out and get sponsors.

“When Brooke became a pro, this was a natural fit, since it was a home game for her,” Wilson says. “They live just down the road, and when I first asked the girls about it, they were very enthusiastic. It’s a great day for them, and junior golf is where Brooke’s heart is. She and Brit love kids. We have appearance days that we can choose to do whatever we wish. But to me it’s more important to do what Brooke and Brittany want to do. And this is an easy choice.”

What can it mean for juniors lucky enough to be accepted into the program? “I think it can be life-altering,” Wilson says. “Being around the game teaches us a lot of good things, a lot of good principles that last a lifetime. From my point of view, even if just 5% emerge to be a talent and have the opportunity to win a junior tournament or play college golf and feel the fun of being in competition, that’s why we and Kevin and Lisa do this. Ping is so supportive of junior golf in the U.S. and college golf, and we’ve been supporting the Canadian College Athletic Association National Championship since 1999. It’s just about opportunity. And it’s nice to be able to give back to the game.”

BUILDING MOMENTUM
“There was a little resistance at the very beginning from sponsors, who said, ‘Buying memberships at a golf club isn’t exactly the heart institute,’” Haime admits. “But as we got traction and everybody saw what golf builds in kids—respect, following the rules, the integrity of the game—it started developing into something special. These were youngsters who were maturing in front of our eyes—great kids who would take their ball caps off, look you in the eye, shake your hand and could go out to play with a CEO of a high-tech firm or some other executive and really impress them. The event has grown and taken on a life of its own. It’s about way more than the golf now; now it’s about building community leaders for tomorrow. A few are on scholarships today. There’s Nick Brisebois at Columbia University, an Ivy League school in Manhattan, captain of the golf team. He had a 4.0 grade point average this year and was named an Academic All American. He’s used his golf to get an opportunity, and used his opportunity to do something incredible. And there’s Jake Bryson, who played on Team Ontario, and is now at Utah Valley on a golf scholarship.”

There was also a wide selection of those sponsored juniors on hand to help staff Haime’s event. “They’re out on the course hitting shots, at the security gate, at the bag drop. It’s important the participants see that. It connects the event,” Haime says.

Nick Brisebois’ younger brother, Alex, was among the group. The 17-year-old Kanata resident was stationed at the par-3 15th of Eagle Creek all day, hitting tee shots with each group—if any tournament player hit it closer to the pin than Brisebois, they were eligible for a draw prize.

In his eighth year with the program, Brisebois is graduating this year from Holy Trinity Catholic High School with an 89 average and plans to take a ‘gap year’ to further refine his game in pursuit of a U.S. scholarship. “I remember writing my application letter (for the junior initiative) eight years ago,” says Brisebois, who entered the program at age 10 with a 28 handicap and now sports a 0.7 index at Kanata G&CC. “For a lot of people, golf is prohibitively expensive. I think things would be completely different for my brother and I, if not for this. I don’t think we’d be able to afford a membership at a nice course like Kanata. I wouldn’t be anywhere near where I am today in terms of my golf and, really, in terms of my life. This program has given me the opportunity to practice every day and really become confident. And that has carried over to other things in life—school, social skills, honesty, integrity, discipline, understanding how to work hard for something you want to achieve.”

Brisebois, who figures he carries the ball around 275 yards, hopes to shave at least another stoke off his handicap before soliciting a list of U.S. schools for scholarship offers. And you have to like the chances of the strapping 6’1” bomber, who registered a striking 1460 score on his SAT this year.

But the tournament has also looked after its participants over the years. The degree of sponsor support has, in fact, made this event a ridiculously good deal for players, most of whom pay $750 apiece but receive roughly the same in corporate gifting, including a Tony Harris Fine Art print and a choice between a custom-fitted Ping G410 Series driver, Ping Vault 2.0 or Sigma 2 adjustable putter, or a $500 credit towards a set of Ping irons. And that doesn’t even include the golf, food and beverage!

But participants once again gave back generously in the auction afterward, where the wide range of items ranged from ClubLink greens fees and a trip for four to Florida, to a trip to Los Angeles including NFL tickets to see the Rams, and golf vacations to Ireland and Cabot Links.
On Ping’s behalf, Wilson also helped secure a truly experiential auction item of a round-trip for three to Scottsdale. “For one of their rounds we organize a PGA Tour player—we’ve had players like Bubba Watson, Kirk Triplett,” Wilson noted. “They also get a tour of our production facility and a VIP fitting on the Tour range.”

When the prize was auctioned off for $11,500, one of the bidders offered to match the price for a duplicate trip. Wilson obliged, meaning an additional $11,500 for the Kids to the Course fund.

“Every golf membership for a kid costs like $500-$700, so I just look at it in terms of how many kids this will help,” Wilson says. “But it’s Kevin and Lisa who deserve all the credit. They do all the work. I’d love to see 10 of them around the country doing this. Imagine if, instead of averaging 50 kids a year, we had 500 getting this opportunity?”

Now that’s the sort of flood that Canadian golf would be happy to deal with.