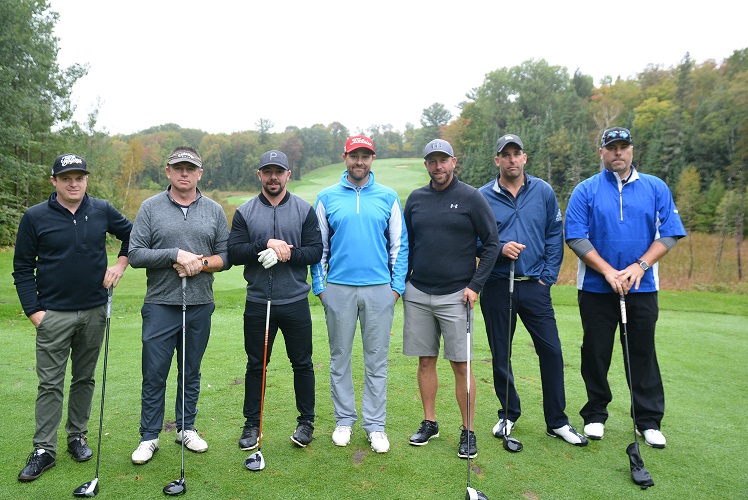 Glen Abbey made the most of a day in Muskoka winning both the 2018 ClubLink Men’s Night Championship Team Championship and the ClubLink $500,000 Hole-in-One Shoot Out, while a member from Wyndance won his fourth ClubLink Long Drive Championship.

On a day that could have been much worse weather-wise, the team of Ashwini Bhasin, Jeff Robson, Denis Schofield and Dennis Collins enjoyed a sweet Glen Abbey victory, despite steady light rain and cool temperatures at spectacular Grandview in Huntsville on September 25.

Coming off a disappointing third-place finish behind King Valley and Emerald Hills in 2017, Glen Abbey retooled with a completely new line-up to win $600 in ClubLink gift cards and Schofield won another $600 in ClubLink dollars for closest to the pin in the ClubLink $500,000 Hole-in-One Shoot Out.

“It was a terrific win for the team and I’ll have nightmares about the shoot out for years to come,” says Schofield, who came within three inches of jarring his shot in the shootout after it rolled right past the hole. It is the closest anyone has come to winning the grand prize in the ClubLink $500,000 Hole-in-One Shoot Out.

“It was a perfect. The best shot I have hit in weeks,” added Schofield who was fourth to go out of 25 players who earned the right to compete in the high-stakes year-end shoot through weekly closest to the pin competitions during Men’s Night at his home club. Schofield already had two hole-in-ones in his back pocket at Glen Abbey and Copetown Woods, so another wasn’t out if the realm in his books.

“When it landed I thought there was a chance it might go in, but now that I have seen the video it makes me noxious, thinking about what could have been. It would have put a different spin on the day if it went in,” he said noting it would have made a heck of a mortgage payment.

“We’re thankful to ClubLink for putting on these great events and giving guys an opportunity to meet members from other clubs,” added Schofield, who was playing in his first Men’s Night Championship and he also competed in the Long Drive Final, but both his shots missed the grid.

“There’s some pressure there, when you get up on the tee with all the competitors watching and you have to crush it. It will give me something to work on for next year,” he said.

The GreyHawk duo of Ken Clark and Chris Joly picked up second and third place ClubLink gift cards respectively in the shoot out – nice going boys!

With two qualifying shots and three more in the final, Brace hit the grid four of five times on No. 18 and he did it again during the tournament to win long drive of the day.

“I got my first tee shots in during both rounds, so then I was able to let it rip,” said Brace, who drove the two hours and 15 minutes from Toronto to Grandview, hopped out of his car and took part in the Long Drive Final without even a practice swing.

Brace won the championship with a drive of 304 yards, well off his winning shot of 338 yards in 2014 and last year’s mark of 327 yards. Considering the wet conditions and no chance of any roll, he had no complaints. Brace was the only competitor to break the 300-yard barrier as Greg Spencer from GreyHawk finished second at 298 yards, followed by Jorin Parthenais from Station Creek at 284 yards, Blake Waters from National Pines at 279 yards and Peter Pettit from Eagle Creek rounded out the top five at 262.

“I got into the final as the seventh man after a misread on the yardage,” Spencer said. “I missed the grid on my first two shots in the final and I thought Oh No, but I was still confident I could get the third one in play. What are the chances of missing three times in a row?”

He crushed his final shot to move into second place.

“I love all of this extra stuff that ClubLink does that other clubs can’t offer,” Spencer said. “It gives me an incentive to come to Men’s Night. Overall, I like what ClubLink brings to the table.”

In the team standings it was Glen Abbey on top at 10-under with a two-way-tie for second at 9-under between the team of; Bill Hutton, Jim Waterman, Brian Vlaanderen and Riaz Khan from Greystone and the team of; Ken Clark, Peter Emery, Rob Knights and Greg Spencer from GreyHawk. Fourth place went to Grandview’s; Darren Gray, Rob Bennett, Patrick Craig and Mark Vader, at 7-under, while King Valley’s; Robert Dempsey, Tony Gargaro, Sang Kang and John Kim settled for fifth place through retrogression at 5-under.

“It’s a great event, I would love to do it again,” says Dan Malloy from Eagle Creek. “It’s my first time at Grandview and I loved it. The shoot out is nerve racking, but that’s part of the fun.”

“This is a can’t miss event. That’s why I keep trying out for it every year,” says Kevin Fobert. “We have an awesome Men’s Night at Eagle Ridge.” On average they have 90 to 100 players on a weekly basis throughout the summer. “It’s the way to meet the guys and have a good time. We have a Men’s Night Muskoka road trip from Eagle Ridge to The Lake Joseph Club for a day that about 90 guys take part in. This was our fourth season doing it.”

“Our Men’s League was up about 15 guys this summer and it’s getting better all of the time,” says Emerald Hills Team Captain, Rob Polan. “This is a fantastic event and it drives guys to come out for men’s night.”

“We had a great season at Glen Abbey with lots of participation,” says Dennis Collins. “We have about 300 male members and we would get 80 to 100 out each week. This victory caps off a great year. It’s like winning our own Fed Ex Cup Championship.”