King’s Riding and Rocky Crest ride the wave to victory 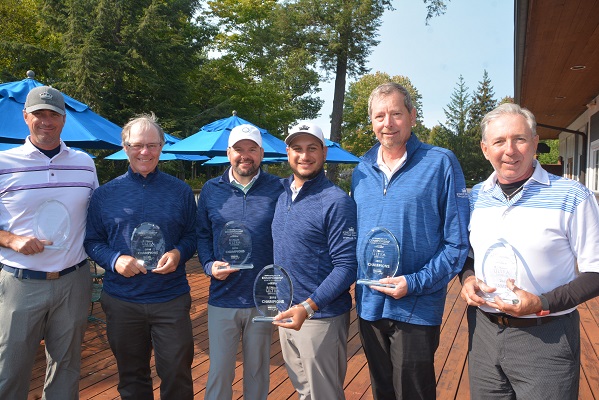 King’s Riding and Rocky Crest road the wave to victory in the WestJet Men’s Interclub Championship Unilock Finals presented by Unilock as summer turned to fall on September 23-24.

Not to be outdone by their Muskoka counterparts, Rocky Crest captured the adidas Division championship in a follow-up to The Lake Joseph’s Club awesome victory in the WestJet Men’s Interclub Championship Final earlier in the month, while King’s Riding picked up their first win in the Consolation Finals since 2005.

“It was a terrific two days of good times, great food and enjoyable competition at Rocky Crest Resort and The Lake Joseph Club for our 24 clubs that were represented,” says Scott Reycraft, Manager of Special Events at ClubLink. “In both divisions, we had tight races featuring come-from-behind victories. What a great way to bring the 2018 interclub matches to a close.”

Wyndance opened Day One of the Adidas Division with 119 Stableford points and a four-point lead as Director of Operations, Brad Sewards led his troops; Warren Bregman, Dave Patterson, Jay Park, Lee Meredith and Greg Eickmeier as they combined to play some fine golf at The Lake Joe Club. Bunched up behind Wyndance were; Rocky Crest with 115 points, Eagle Ridge at 114 points and Greenhills at 111.

After an evening that included a delicious champions dinner for all 144 competitors with MC Rod Black and then some relaxing at Rocky Crest Resort, Day 2 for the Adidas Division moved over to Rocky Crest for the final round where Joe Pagano, James Haroun, Steve Dranfield, Terry McNally, George Smith and Rocky Crest Director of Operations, Mark Kerwin, prevailed on home turf.

“It felt fantastic to win it. We knew we had our work cut out for ourselves, trialing after day one, so to make the comeback was awesome,” said Terry McNally, who was playing on the squad for the very first time after sneaking in as a super senior.

At the end of the day, Rocky Crest accumulated a three-point victory with 237 points, while Wyndance dropped to second place with 234 points, followed by Grandview at 219 and both Bethesda Grange and The Club at Bond at 218.

“It was a fantastic two days. It’s great competition, but it’s also a terrific opportunity to meet more players from other clubs and it’s great to spend two days with the guys from our club to build on the camaraderie that we have at the club,” McNally added.

On the other side of the table, six teams found themselves within four points of the lead after Day One of the Michelob Ultra Division at Rocky Crest. Eagle Creek led the way with 117 points, followed by three-way tie for second at 116 points between Heron Point, King’s Riding and GreyHawk, while King Valley settled into fifth spot at 115 just ahead of The Country Club at 114.

That said, King’s Riding rose to the occasion on Day 2 at Lake Joe as they moved from third to first with 225 points, while King Valley leaped from fifth to second with 224 points, as Eagle Creek dropped to third overall with 220 points and GreyHawk rounded out the top four at 220 points.

“It feels sweet to beat King Valley. I think it was 2005 when we last won the Consolation Finals and we also beat King Valley by a single point,” says team captain, Mike Froio, who has played in the event six or seven times. “I filled up the beer fridge, we had a terrific dinner with all the guys and then we watched some Monday Night Football. We didn’t really talk strategy after round one. The goal was just to get the ball in the hole as soon as possible on each hole and see what happened.”

Members of the winning squad included; Steve Harris, Andre Brideau, Al Corbeil, Al Van Veldhuizen and King’s Riding Director of Operations, Andrew George, who said he will find a nice spot in the golf shop to display the championship trophy. “It really took all six of us to do our best to win this, a total team effort and a great experience from start to finish,” Froio added.

Even though they finished just outside the top-3, Chris Joly from GreyHawk enjoyed his third consecutive appearance in the championship. “It’s a terrific time, every time, a lot of fun. It’s great to hang out with your pro. The food was fabulous,” he said, noting that two GreyHawk teams came up early and played Grandview the day before the championship and then they all headed over to Grandview for the Men’s League Interclub Championship the following night.

“We sucked, but everything else was great,” added RattleSnake’s Otto Trozzolo. “Chris our pro bought the beer, Michelob Ultra, and it was fun to hang out with the guys on the team and with other ClubLink members.”

Eagle Creek Club Champion Patrick Goodhue also enjoyed his first exposure to the Men’s Interclub Championship. “The resort is awesome, and the golf courses are terrific. We played with King Valley today and Country Club yesterday and they were great guys. It’s competitive, but you’re still rooting for the other guy to make his shot,” said Patrick, noting they spent a lot of time on their phones during Sunday’s round keeping track of Tiger Woods’ progress in the final round of the Tour Championship, that he went on to win.

Peter Emery, a member from GreyHawk, who was a last-minute addition to the team, almost didn’t make it. The captain of a fire pumper truck worked a 24-hour shift in Ottawa on the Friday before the championship responding to emergency calls after several neighbourhoods were hit by a series of six tornadoes before heading off to Muskoka to play golf with his buddies.

“In my 31 years on the job I have never seen destruction like that from weather. It’s a miracle no one died, so when I was missing my putt today I didn’t feel that bad out it,” he said. “It’s beautiful here. The courses are magnificent. Rocky Crest is my favourite ClubLink course and I have played them all, even the ones in Florida. It’s a treat any time we can play here. We had an unbelievable time and I hope to come back again.”