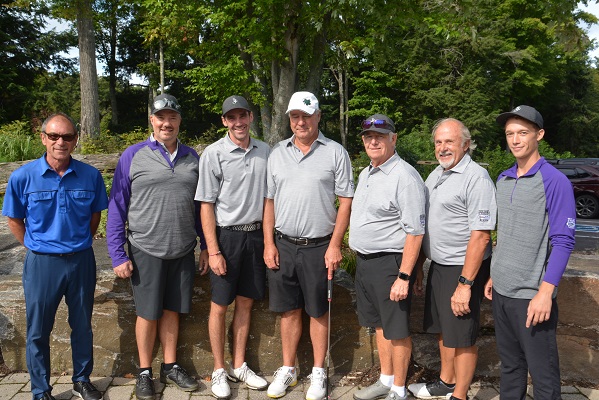 The Lake Joseph Club made the most of its first appearance in the WestJet Men’s Interclub Championship presented by Unilock on September 5-6 in magnificent Muskoka.

With home course knowledge in their back pocket, the team of Richard Harley, Michael Horrocks, Brian Gulledge, Tyler Dacosta, Murray Martin and Sterling Emery put together three solid rounds to win by a single point when all was said and done.

“This is big news for us,” said Richard Harley Lake Joe’s Team Captain. “This is the first time that we know of that Lake Joe has been in the Men’s Interclub Championship and then we went on to win it. There’s no question that having home court advantage helped us, but we worked hard as a team and tried to make every shot count. We had a fierce duel with Hautes Plaines in the final round. They came right at us. We struggled out of the gate, but got it together. Their pro Jean Leduc shot 68 and our pro Sterling Emery shot 69. It was an epic battle all the way and a lot of fun to be a part of.”

For the last few years ClubLink’s premier event featuring the top eight teams coming out of the summer-long qualifying process had made the trek to Florida to play in the championship finale. This year the championship returned to Ontario for a fun-filled two days and two nights at The Lake Joseph Club and the wonderfully accommodating Sherwood Inn.

“This is a terrific event,” Richard Harley added. “It not only brings guys from your team closer together, but it allows you to meet a whole group of other guys who all enjoy golf and having a good time. For us it’s a great way to showcase our home course that we are proud of. We have had a really fun season up north and this is a wonderful way to cap it off.”

After receiving a new pair of golf shoes courtesy of adidas and a tasty lunch at The Lake Joseph Club, the top eight teams; Hautes Plaines, Kanata G&CC, Caledon Woods, Emerald Hills, Cherry Downs, DiamondBack, Glen Abbey and The Lake Joseph Club teed it up for the first of three rounds on Wednesday, Sept. 5.

Using a stableford point scoring format for the six-person teams that included one golf professional from each club, Lake Joseph jumped to the early lead with 118 points, with Caledon Woods and Emerald Hills hot on their heels with 113 points and Hautes Plaines and DiamondBack a little further back in a tie for fourth place with 100 points.

Following a lively team dinner the WestJet shootout was postponed until the next day after a thunderstorm roared through the area. Everyone then gathered in the main lodge at the Sherwood Inn for a chance to relax and plan for day two with live music in the background and a delicious late-night banquet.

Day two started with the par-3 Challenge on Lake Joe’s fantastic nine-hole Short Course where the Kanata squad of Dru Lafave, Peter Sheddler, Eric Lake, Gord Lawson, Greg Sim and Director of Operations, Scott Johnson finished on top with 20 points to move into a tie with Hautes Plaines for second overall. Lake Joseph didn’t give up much ground in the scramble, finishing with 18 points to retain the overall lead, followed by Emerald Hills with 16 points and Hautes Plaines with 14 points.

The highlight of the round was Gord Lawson’s hole in one on the par-3 third hole with a sand wedge from 85 yards.

“I didn’t see it go in the hole, but my partner Eric Lake did. He’s my good luck charm. He was with me when I had my first at King’s Riding,” added Gord who was playing with a yellow ball to the dismay of Director of Operations, Scott Johnson, but they still counted it. “Any time you get a hole in one, it’s a fun moment. I’m just glad I could share it with these guys and help the team out,” Gord said.

Hautes Plaines came out hard for round three on Lake Joe’s championship course racking up 127 stableford points, but it wasn’t quite enough as Lake Joseph collected 116 points and DiamondBack, Emerald Hills and Caledon Woods earned 111 points.

“Win or lose it’s just a fun three days with a great group of guys,” said Sebastien Cote from Hautes Plaines. “It’s always a pleasure to come to Muskoka. It’s a super cool event, a first-class show with a great atmosphere and awesome prizes.”

The 11-point differential vaulted the Hautes Plaines team of; Stephane Racine, Martin Leduc, Sebastien Cote, Gaetan Ethier, Michel Larocque and Director of Operations, Jean Leduc into second place in the overall standings with a grand total of 251 points, one point behind Lake Joseph. Third place overall went to Emerald Hills with 240 points followed by Caledon Woods at 234 points and Kanata rounding out the top five with 233 points.

“I’m very proud of our guys. It was a great team effort to get us back into the tournament and we almost pulled off the upset,” Michel Larocque, Hautes Plaines’ Team Captain said, noting they won their division at the Men’s Interclub Consolation Finals last year at The Lake Joseph Club and Rocky Crest.

“It’s an amazing event. I can’t thank ClubLink and everyone at The Lake Joseph Club and Sherwood Inn enough for two wonderful days in Muskoka,” Michel added. “The Par-3 Challenge and the WestJet Shootout added something different and exciting to the event and Sherwood Inn is so welcoming with excellent food and service. One of our guys won WestJet tickets. Overall you could not go wrong.”

Although delayed a day, the WestJet shootout had everyone flying high for an opportunity to win one of four sets of two tickets anywhere WestJet flies in North America. The first round went to Sebastien Cote from Hautes Plaines at 3’ 4” from the hole. Dru LaFave from Kanata won the second round. Kyle Nixon from Caledon Woods won the third round at 2’ 3” from the hole and Jim Izzett from Cherry Downs won the final round at 8’ from the pin.

“I just lost out in the first round of the shoot after leading most of the way, so in the second round I just tried to put the same swing on it again with a baby wedge and it worked out,” Dru LaFave said. “It’s always wonderful to take part in an event like this. It’s just like being a kid again. We had our own rooms with a spectacular view of the lake. The golf was great, the food was excellent, and we’re treated so well. You couldn’t ask for anything more.”

“I’m just so excited to be part of the interclub championship. I’m a first-year member with ClubLink and this has been an incredible experience from start to finish,” added Kyle Nixon from Caledon Woods. “Getting to know the guys and hanging out at Sherwood Inn and Lake Joe for two days is pretty special. It’s a great way to finish off a wonderful first year at Caledon Woods.”

The championship four-course dinner at Sherwood Inn featuring a little bit of everything, including Crispy Pickerel Cakes, Bisque of Celery Root & Pear Soup, Crusted Muskoka Beef Tenderloin, Fresh Rainbow Trout and Raw Vanilla Cheesecake closed out the event with one more evening at the inn to conclude a triumphant return of the colourful event to Ontario.